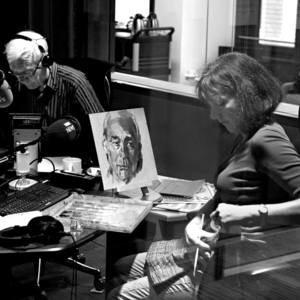 I produce uplifting drawings & oil paintings of people, but also of flora & fauna, which capture the spirit of my subjects. My work includes commissioned portraits that make the perfect gift & I have portrayed some of the best known names in British broadcast news including Kate Adie.

Performers inspire me, both on the street & in venues, & I aim to capture the creative energy of performing live. I’m Resident Artist at The Half Moon Putney, one of London's iconic music venues where a selection of my work is on show.

On London's Southbank I exhibit as part of an art collective Skylark Galleries 2 on the 1st floor of Oxo Tower Wharf. In Brighton I'm represented by Kellie Miller Arts for whom I’ve created a series of oil paintings featuring bathers which hold up a mirror to a love that binds us all - of being by the sea. My open studios are in mid September as part of BEAT - the Borough of Ealing Art Trail.

I’m a founding member of the Lots Road Group of portrait artists who met when studying at The Heatherley School of Fine Art & exhibit regularly on a theme.

Winner of the Judges' Prize at Egypt's first biennale (2013), I’ve exhibited at the Milan Expo, the Royal Society of Portrait Painters & National Open Art exhibitions (2015). I also tutor drawing in the inspiring surrounds of the V&A, National Portrait Gallery, Tate Britain and the Courtauld for Sketchout