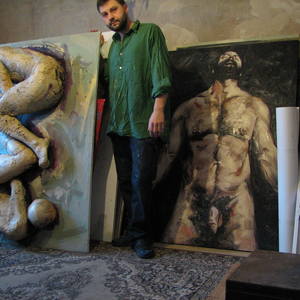 In 2017, he received as the only one of the 186 artists award of the Zoological Garden at the IVth Triennial of Painting ANIMALIS 2017, organized by the Chorzów Cultural Center.

In 2015, currently, out of 439 artists submitted to the Third Biennial in Piotrków he was qualified for the final exhibition together with 53 other declarations.

In 2014, he was awarded of the 44 artists for relief "Martony 4" the Second Prize of Starosta Czarnkowsko - Trzcianecki in the Greater Poland Art Saloon!!!

In 2011, he was awarded as the only one of the 240 artists in the second ANIMALIS Painting Triennial, organized by the Chorzów Centre of Culture received by the image Fri. "Raid" Prize of the President of ZPAP Jack Kucaba - Main Board and honorable mention.

Born on 20 September 1979. in Wałcz. In 2001 he graduated from the College in Wałczu under the auspices of the Academy of Fine Arts in the studio of the ad. Andrew Zdanowicz. Member of the Union of Artists branch in Piła 2010 - 2019, art-therapist, president of the therapeutic arts association - "Asylum". Currently he lives and works in Ireland in a small town Dungarvan.

The Artist is inspired by the work of Jenny Saville, Francis Bacon and Lucian Freud.

One of the most interesting projects completed by the artist in 2012 was the installation of the entire frontal wall of the building of the Cultural Centre in Wałcz with the project devoted to disability.

In addition to the installations his passion is painting, as well as other activities in various schools with young people and adults, where he provides therapeutic art classes.

- Award of the Zoological Garden in the IVth Triennial of Painting ANIMALIS 2017, Chorzów 2017
• Second Prize of the Mayor of Czarnków and Trzcianka (Greater Poland Art Saloon), Czarnków 2014
• In the competition organized by Qadrans Qltury and website Talent.pl under the auspices of the portal Cultural Art Empire he was awarded with the title of Artist of the month in April 2014
• Audience Award of the Year 2011- Living Annual 2011 - The Museum in Wałcz, Wałcz 2012
• Award of the President of ZPAP (Main Board in Warsaw) in the second ANIMALIS Painting Triennial, Chorzów 2011
• Honorable Mention in the Second Triennial of Painting ANIMALIS, Chorzów 2011
• Audience Award of the Year 2008 - Annual Salon 2008 - The Museum in Wałcz, Wałcz 2009