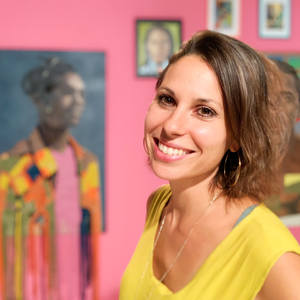 For enquiries please get in touch through Unix Gallery, NYC.

I am exploring my own personal mythology that speaks about identity and the core concerns of human existence. It's a constellation of my beliefs, feelings and images that construct my own explanation of the world.

Some of the questions I ask through the work are, where do we come from, why is our planet and wellbeing so out of balance? Defaulting to fear and frustration rather than love and creation and how it is our responsibility individually to shift that.

My research includes painting daily thoughts and stories. These stories are from personal experiences, observations, conversations and videos and books on the quantum field and the power of thought and intention. I am also looking at mythological paintings from the renaissance period and overlaying my reaction to them on top of the image. And continuing my research on western and eastern story telling through mythology and seeing where that leads me.

The aesthetic framework that I am using is one of mythology; which portrays a sense of magic, morality, a life lesson and even mystical creatures. I have added a sense of lightheartedness to the work, almost childlike imagery or a larger scale sketch which provokes a freedom from the left brain thinking which is typical of the society we live in who struggle to obtain their connection to nature and intuition. My work ideally encourages one to see a point of view from an open mind, with fresh child like eyes.