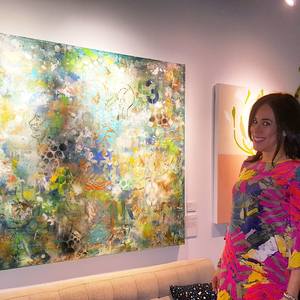 Sona Mirzaei is a multidisciplinary artist from Los Angeles, California. Building on an innate interest in art evident since her early childhood, Sona took advantage of a rather liberal upbringing and indulged her interest in the arts and sports. Exposure to the LA & New York art community led her to finding full expression through her own artwork, producing a series of collages, acrylics, oil paintings, performance art, etchings and sculptures that would presage her career as an artist that has become collected by many high-profile patrons today.

Sona understands that connecting art and people brings the community together in unity that creates a certain lifestyle and dependence for it motivates her every day. Whether it being interactive, contemporary, pop art, street art, murals, sculpture, lighting, design, architecture people are looking for something to inspire them all the time.

Most recently she was featured on Million Dollar Home Listings on BRAVO TV, a Cadillac commercial and more! Also was in the Huffington Post, was awarded artist of the year in 2014 with Art for Progress (AFP), based in New York City. AFP seeks to increase the visibility of talented artists, to raise the awareness of the importance of arts education and creativity throughout the United States. In making the award to Sona, AFP found her paintings consist of great layers, depth, and texture that manifest dimensions, liveliness and joy that her works bestows onto others. She is currently working in abstract expressionism, pop art, sculpture, street art, creative design, mixed media, figurative, conceptual, 3dimensional, and on public art.

Sona interest extends to public art as she believes that people should be able to experience art anywhere and place and this notion of working dimensional and outdoors opened a great opportunity for her to have experienced a Sotheby's auction with her elephant Triumph of Unity in Singapore which was sponsored by Air France in 2012. The last couple of years have brought more awareness to Sona's career in the form of public art exhibitions and these experiences have also allowed for Sona to have her first museum exhibition at the Asian Civilization of Art Museum, following the Milton Museum in Massachusetts, later the Petersen Auto Museum in Los Angeles with the Warner Brothers Marvel comic book collection.

In 2008, she had an auspicious debut on the international art scene after two pieces from her first official collection of work were chosen as finalists for the London International Creative Competition (LICC). This year she was just awarded as an LA Semifinalists for the Rush Philanthropic Bombay Gin Sapphire Artisan Series for Scope Art Basel Miami 2015. Out of 2000 artists in the Los Angeles area, she was selected #11 and now a part of prestigious group of talented artists! These accomplishments have allowed her art to have been showcased privately and publicly in museums, in public places around the world, gallery exhibitions, and homes of patrons, hotels, featured on a variety of news media outlets with celebrities, commercials, television shows, charity auctions and other venues.

Sona has become a vibrant force in the International art community and has exhibited her works in London, Singapore, Copenhagen, Chicago, Las Vegas, Toronto, Paris, Miami, Hong Kong, New York City, Dubai, San Francisco, and numerous venues and galleries all over Southern California. She has a genuine artistically pure goal of continuing to evolve and create magic thorough the lens of the visual medium which she believes has the power to transform and transcend virtually any space.

"Sona is certainly an artist of our times. As stated by Los Angeles based art critic, Peter Frank, “Sona Mirzaei paints like a cross between a house on fire and a bat out of hell. She seems almost literally to whip her abstract paintings into shape. The results of her work are exciting to witness!"