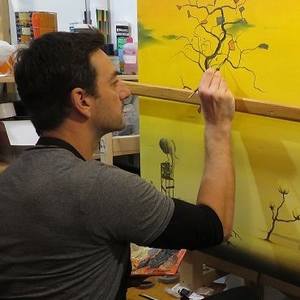 My name is Filippos Drosos. I was born in Thessaloniki two months after the official presentation of the first Walkman and about a month and half before the first edition of Douglas Adams’ “Hitchhiker’s guide to the galaxy”.

My childhood memories consist -to a perhaps irrational extent- of paintings, drawings, and objects made of clay, wood, paper etc. Every new material I could lay my hands on, when found not edible, after a necessary testing of course, automatically became food for thought and was turned into a toy or a creative challenge. Because of this need to create, or sometimes to destroy, I got to work so as to improve my artistic abilities.

At the age of twelve and for the next three years, I took painting lessons and was first introduced to water and oil colours. A few years later I got acquainted with sketching and architecture drawing lessons and a year later I attended the School of Graphic art and Design at the Technological Institute in Athens. More particularly I got a BA in Conservation of Antiquities and Works of Art. A world full of (mostly ) non-edible materials and a variety of techniques was presented to me through me studies, and I was first introduced to the Art history.

Since 2005 I worked as a conservationist of antiquities in different excavation sites in Pella and Thessaloniki, while lately I also work in the conservation and restoration of buildings.

Despite my professional engagements, most of my free time was dedicated to painting, and the creation of objects with stained glass, metal, glass, wood and a variety of other materials. Naturally after some time my home got crammed with paintings and other artworks. This practical ‘problem’ somehow pushed me to externalize my work, as the works themselves ‘demanded’ to break free and get to know other people.

I understood then that artistic creation, besides satisfying my need to get myself and everything around me dirty as much as I can, is predominantly a means of expressing and communication my feelings and ideas. As such my works pressed me to expose them as well as myself to a wider audience.

On the one hand, my communication with an audience and its positive reaction to my work, combined with my conviction that art should be accessible to all people regardless of class, economic status or education, on the other, lead to a decision: to start Plan B Art. In the autumn of 2017, my partner and I built a space dedicated to art, communication and expression, where I create and permanently exhibit my works.