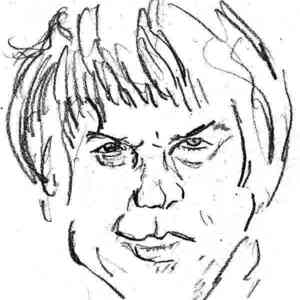 Ilived worked, and exhibited at the Gunnery, Woolloomooloo, from 1985-91. Previously I studied history, english, and other languages at Sydney University.

I lived in Berlin in 1986. Otherwise I've been in Sydney, or Melbourne, or on the north cost of NSW.

I've been exhibiting since around 1985, most recently 'All in the Name of Liberty', with Vasili Papageorgiou at the Fitzroy gallery, Fitzroy - http://name-of-liberty.blogspot.com

I also am working on software to design tiling symmetries - xndraw. I will sometime release the code under open-source license. As well as my own compositions, fantasies and satires, I paint and draw landscapes and portraits, including commissions

1987: The Big Bang at the Gunnery - the first (of many) major exhibitions at the Gunnery. A multimedia group show with 50+ participants , image, music, film.

1991: The Lightning Catcher, solo exhibition of paintings, Kinselas, Darlinghurst- my first, but not last show in a former funeral parlour

2001: Flying in the Face of Reality. Paintings of Sydney and the Olympics. Solo. TAP Gallery, Darlinghurst(Sydney)

2005: Subjects awaiting Interrogation. Paintings inspired by the(illegal) US extra-judicial incarceration system, other behaviourist animal experiments , and the Australian abolition of citizenship(in the name of national security). We are subjects, awaiting interrogation in an antechamber to Guantanamo Bay.

2006: "What's Newtown to You?"
Landscapes and portraits of this much-loved inner Sydney suburb. http://newt0wn.blogspot.com