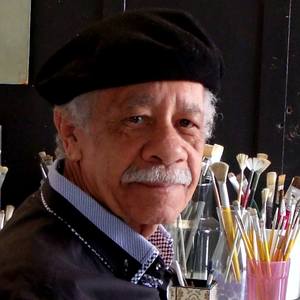 PAULO ACENCIO DE ARAUJO was born in Juazeiro, Bahia, Brazil, on 30 days of June 1944. Lives in SÃ£o Paulo since 1958.
OTHER ACTIVITIES:
It has actively participated in the contemporary art movement in Brazil and abroad. Awarded several times since the awards medals acquisitive. In addition to the Fine Arts the artist has made inroads in Literature in Graphic Arts and Photography. During four years taught courses in art at the Art Gallery of SESI / FIESP the invitation of the gallery. Has conducted numerous workshops in business and cultural centers.

He studied drawing and painting in the atelier of the master Abedante Romano from 1962 to 1966.