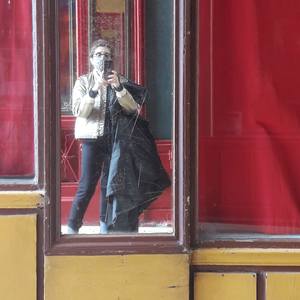 I Live and work in Paris and Dinard, France.
My works question, through different mediums such as photography, drawing or painting, the ephemeral nature of things and beings, their impermanence.
I like to play with the limits of the figurative, creating different universes.
My favorite subjets are nature, lanscapes but also relations ships between humans beings as in my series of couples.
No colors for my drawings in graphite, a deliberately reduced palette, where I decline all shades from deep black to almost transparent gray. Foliage, flowers, plants always mysterious "soliciting perception, doubt ..."
Someone in an exibition said me that my drawings seem like aquatint. It was a surprise for me because I never thought my work in this way.
But after thinking it over, I imagine this is a legacy of my school years, during which I practiced etching and loved drawing as a medium.
About my artistics influencies:
I particularly appreciate the painting of the Victorian era, and in particular that of
Pre-Raphaelite painters, John Everett Millais and John William Waterhouse as well as those of the
17th century Dutch, and more specifically Johannes Veermer's genre scenes. In
as regards contemporary art, the works and approaches of the following artists: Gerhard Richter,
Edward Hopper, Tony Oursler, Anish Kapoor, Bill Viola, Andy Goldsworthy as well as Christo and Jeanne-Claude.

1981: Bachelor of Fine Arts, University of Paris I, Panthéon Sorbonne.