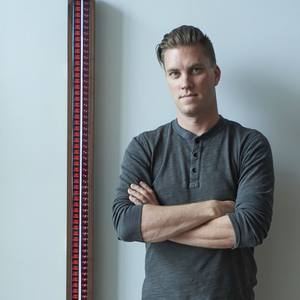 Alan Strack is an abstract multimedia artist investigating the cultural significance and universal nostalgia of cinema. Exploring the application of light and color on unique lightbox installations, Strack curates and arranges strips of 35mm film and illuminates them to capture scenes of the human experience.

Paying homage to his family’s roots in the movie industry, Strack sources the film he uses in his work from a 3000-reel archive of movie trailers and features, rescued when his grandparents’ movie theater in Oneonta, New York closed in the late 1990s. Initially destined to obscurity in the trash, Strack salvaged and stored the reels – now ancient artifacts in a digital landscape – for over 20 years before giving them new life as art installations.

The visual psychology of cinema as experienced in their theater and aroundthe world through travel is deeply woven throughout Strack’s journey as a designer and artist. Strack’s family moved frequently during his early life – including to Tokyo, Japan – but his grandparents’ theater was always a space of comfort and homecoming. Influenced by the movie posters outside the theater and their ability to capture the entire essence of the film in one still image, Strack would go on to pursue the study of graphic design & photography at Northeastern University in Boston.

He then went on to translate his passion for design and visual media into a 13-year engagement as an art director for Nike, starting first in Hong Kong and then moving to Portland, Oregon. While at Nike Strack worked on signature clothing collections for iconic athletes including Michael Jordan, Kobe Bryant, Lebron James and Kevin Durant.

In 2018, Strack relocated from Portland, Oregon to Brooklyn, New York to focus his artistic efforts on creating Light-Reel installations full-time. A hybrid of design and photography, his Light-Reel series embodies a new way for viewers to experience their favorite classic and cult films.

Strack and his artwork have been featured in Architectural Digest, New York Cottages and Gardens, NY Mag, and Galerie Magazine amongst other publications.