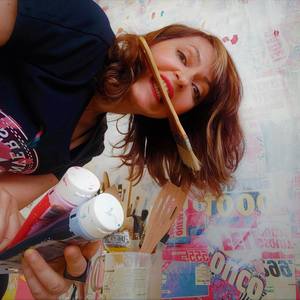 Brief biographical statement:
Al.Ma. is a Portuguese artist who was born in MOZAMBIQUE, where she spent her childhood.
Actually she lives and works at Porto, in the north of Portugal, divided between teaching and plastic creation.
AlMa took her Licentiate Degree in Painting in 1992 at FBAUP (University of Fine Arts of Porto).
She has participated in several collective Exhibitions and activities since 1988 in Portugal, Germany, Brazil, France, Spain, Canada, etc., she held several solo exhibitions in Portugal and received some awards and distinctions both in Portugal and abroad.
AlMa comes from a generation of artists that has chosen, facing a saturated visual world, the appropriation and recycling of several images from varied sources, for the last twenty, thirty years. Yet, her inclusion in this group is controversial, since instead of the usual method of unconditional stealing of references, historic quotations and the respective recycling giving rise to a scattering of the meaning, her case has been revealing a restricted idiosyncratic orientation.
That Alma wants us to be enraptured by this childhood world seems to be, in the very act, her aim. Though it clearly shows, at first sight, a good imitation of the compulsory childish trend to write and paint on inappropriate surfaces, the author’s vandalism, only apparently innocent, goes obviously even farther.
In this fluid, transparent and theatrical space, an interaction of mutual influence, either graphic or plastic, reveals itself – between the background pulsation (staging reality) and the overlapped drawings (paradigmatic of the childish imaginary). From this agitation an expressive strength of a nostalgic, metaphysic and a kind of lost time atmosphere appears.
About her process the artist says:” I like to play with images and establish tensions, to focus attention from some icons by opposition to others. At the present, I frequently use images like pop stars or very recognized objects in comparison with others less recognized, like typical, regional or tribal ones.
Sometimes this context creates a bizarre and an unexpected environment that I intend to catch the observer and lead him to wonder.
I broach the subject of playful mood, and use scrawls to demarcate the territory that represents my imagination”.