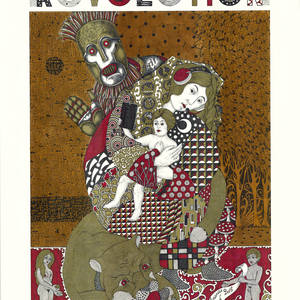 Amanita's graphic sheets can be paralleled to a scholastic treatise about the universe order: he forms his own world, creates his encyclopaedia from the mixture of the European and Asian cultures and their grotesque transformations in the Soviet and post-Soviet space.His phenomenal craftsmanship overwhelms one by the artist’s capacity for outstanding endurance and makes him similar to the Middle Ages manuscripts illustrators. OILseries is a reflection on the role of oil in world economic, political and cultural environment.

These daedalic sheets present an empire as a controversial bundle of Old Russian, Soviet, Asian, and European constituents.