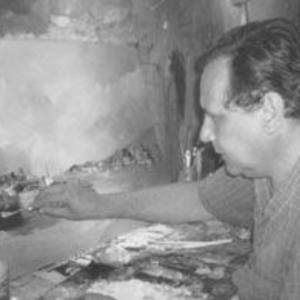 "Painting the sea and sky provides me with the perfect excuse to express myself in my love of color and bold strokes. The abstract aspect of my paintings enables me to experiment and get lost in the imagery it evokes, while allowing the viewer to interpret the work through their own feelings and emotions. There is nothing shy about the sea nor in my work!", says the artist.

Having honed his craft for more than 30 years, Vivo's body of work encompasses various themes, from realistic and semi-abstract landscapes, seascapes and beaches, to abstract human forms and shapes. His preferred technique is oil on canvas or board using palette knives and brushes, with bold strokes and colors.

For many years, he held the position of Director of The Painters & Sculptors Association of Uruguay.

Vivo currently heads his own atelier, located in Montevideo, where he teaches art and exhibits his paintings. His work is included in private and corporate collections worldwide.

He has been awarded several prizes at art contests for paintings, drawings and installations.

He has illustrated books and book covers.

Studied at the atelier of masters Miguel A. Pareja, Felix Bernasconi, Osvaldo Leite, Ana Salcovsky and Clever Lara, all well known and recognized artists and masters.

His art has been exhibited in several individual and collective exhibitions both in his native country, Uruguay, as well as Argentina, Spain, Australia, Canada and the US.

Permanent exhibition in his atelier in Montevideo, Uruguay, as well as at Providence Gallery in Charlotte, North Carolina and Atelier de la Barra in Buenos Aires, Argentina.

His noted collection "The Gold Route" commissioned by UME, a Canadian-Australian mining company exploiting gold mines in Minas de Corrales, Uruguay, is exhibited at the company's headquarters. An interesting fact in the collection is the suggestion, in one of the paintings, that the famous tango singer Carlos Gardel was raised there.