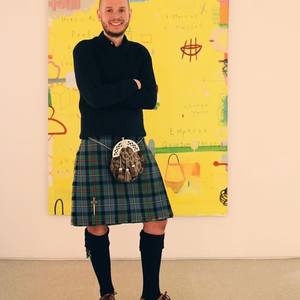 Andrew Weir was born in Scotland. He studied at Gray's School of Art (Robert Gordon University) and graduated with BA(hons) in 2003. As part of his degree he also studied at the Maastricht Academy of Fine Arts (The Netherlands)

He lived in Japan for almost a decade and moved back to Europe in the spring of 2017.

Andrew Weir has exhibited in galleries across Europe, Australia, Asia & North America. His work is also held in private collections around the globe.

Featured in Saatchi's "In The Abstract' Spring 2019 catalog.

Featured in Saatchi's "9 Emerging Artists to Buy Now" in their Spring Collection 2018 magazine.

"The Ship of Theseus no.2" was featured in the New This Week 2-5-2018 Collection on Saatchi Art's homepage.

"Who The Hell is Herod (Triptych, in pink)" was featured in the New This Week 1-29-2018 Collection on Saatchi Art's homepage.

"The Ship of Theseus no.2" will be featured in the Average Art magazine. The magazine will be published on the 19th January 2018

"And The Whole Thing Became Kabuki no.2" was featured in the New This Week 10-23-2017 Collection on Saatchi Art's

"The Promise in Naoji's Letter no.2" was featured in the New This Week 10-16-2017 Collection on Saatchi Art

"And The Whole Thing Became Kabuki no.2" was featured in the Royal Glasgow Institute of the Fine Arts 154th Open Annual Exhibition 2017 catalogue.

My painting, 'We Are Moments Away' was featured in the promotional video (can be seen on YouTube) for "Introducing Limited by Saatchi Art" - September 2017

"An Arduous Study on Happiness" Solo Exhibition at The Gail Severn Gallery in Ketchum, Idaho. September 2020.

Represented by the Paul Stewart Gallery in Paris, France (since July 2018)

New paintings are on show (from June 2018) at the 19Karen Contemporary Art Space in Queensland, Australia (www.19karen.com.au) Andrew Weir is represented by 19Karen (Since May 2017)

"Everything & Anything" will be part of The Royal Scottish Academy Open Exhibition which will be on throughout the Edinburgh Festival. Exhibition is open to the public from 22 July - 1st October, 2017

Represented by the 19Karen Contemporary Art Space in Queensland, Australia.

The Maastricht Academy of Fine Arts (The Netherlands)

Watch A Video About Andrew Weir