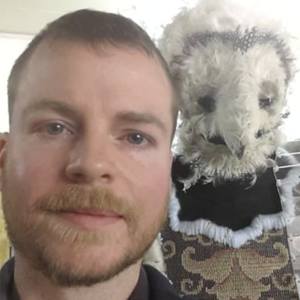 Initially inspired by ideas of tacit knowledge, the origins of creativity and the intuitive way children make art, he then expanded his practice to incorporate video projections and circuit-bending performances during his time studying for his masters in Contemporary Art Practice at Edinburgh College of Art.

These explorations of using technology as an immersive experience- continued his interest in exploring new realities via installation and conceptual work. ‘Adam Linklater: Mythopoeia’ is Andy’s most recent and ambitious work. Exhibited as part of the Edinburgh Art Festival in 2018. This multi-layered exhibition involving film, collage, performance and photography was the result of a four-year project where Andy explored the role of artist as mythmaker in the age of the internet conspiracy theory.

“My work deals with many different themes from the origins of creativity with the understanding of inherent and embedded knowledge, to the study of human behaviour and the social sciences. I am also interested on the effect that the Internet is having on our learning. Having unlimited access to knowledge on every possible subject is an amazing thing but it also opens us up to false and or conflicting information, adding to an ever increasing mistrust of our governments and the education we are taught at school. I find interest in many things but I also enjoy the process of allowing the chance mark, inspire the form/idea allowing my Tacit knowledge in many ways take over.

Andy was selected early on in his career to exhibit at the prestigious Royal Scottish Academy’s “New Contemporaries Exhibition in 2010” at which he was awarded both the ‘Royal Scottish Academy and Edinburgh Printmaking prizes. Andy also has work held at the renowned Stirling University Art collection.

2009 ‘e-Creative London’ as part of “Inclusive Innovation: Future Scenarios”, London Design Festival, selected by art-s-talker. ‘e-Creative 2009″ was also presented in the VIP and PRESS area in the London Design Embassy at the V&A’s Sackler Center.

and toured various venues in the Highlands and Islands. It was also shown as part of the Southern

Graphics Council conference in Chicago. The folio was shown at the Dekelb Gallery, Illinois, USA.

2013 Short Listed for The RSA Residencies for Scotland 2013