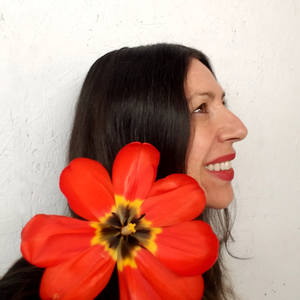 Artist Alexandra Dillon is a Los Angeles-based surrealist who paints on found objects.

Her portraits on worn paintbrushes are especially charming. Rather than start with a fixed idea for her imaginary people, she just begins to paint. “They show up and tell me who they are” she says. Working on each piece over the course of several days, she finds the emotion and personality of her characters. The results are beautiful and engaging faces, often reminiscent of Roman-Egyptian mummy portraits or Baroque painting. “I’m influenced by the art of every era”, she says.
Her work on other found objects, such as axes, cleavers and locks, is more provocative. “The portraits on tools are complex.” she says. “They’re about inner motivations, personal relationships and powerful emotions. They are intended to make you think.”

A native of Los Angeles, Alexandra Dillon received her B.A. in film from UCLA, then returned to her life-long passion for making art. Her love of Old Master painting led her to study classical realism in Florence, Italy, then New Orleans, finally settling in Venice, CA. She has since appeared in group and solo shows in Los Angeles. Her current work on found objects and paintbrushes has gone viral on Instagram and earned her an international reputation for edgy surrealism and inventive work on found objects.