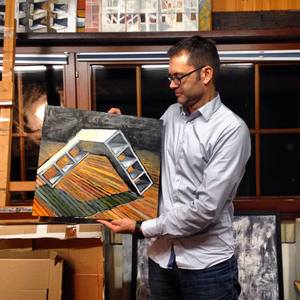 My pictures are not a representation of actual buildings, but rather a vision, for better or worse, of how an architect thinks about buildings even before they are built in real life. Through concretising the imaginary world of the architect into drawings or artefacts a parallel narrative is created to that of the built world. My furniture are therefore rather designs for furniture, whether functional or otherwise. My cityscapes are visions for a city - not utopian, but human and flawed. My houses have more to do with how I perceive houses in my daily work - on the drawing board - with all their limits and restrictions, yet full of potential and power. I mediate between traditional fine art and the world of architecture and design.

My painting and compositional techniques are tied in with the drawing, rendering and draughting techniques that are integral to my work as an architect. This allows me to move back and forth across the lines between what is traditional painting, what is design and what is architectural rendering.

I was born in 1972 in the Western Cape, South Africa. I started painting in 1998. Since then I have lived for extended periods in Cape Town, Dublin, Munich and since 2014 on the Swabian Alb, Germany.

I studied architecture at the Nelson Mandela Metropolitan University in Port Elizabeth, South Africa, between 1992 and 1997.