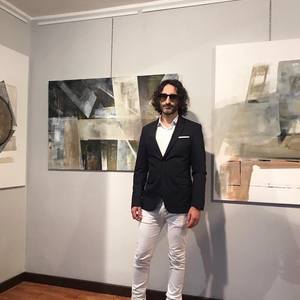 BIOGRAPHY___
Named "Artist of the Day" on Saatchi Art on March 9, 2021.
Artist featured in a collection of Saatchi Art 2020.
Composer and multi-instrumentalist, painter, photographer and videomaker, Nino Siragusa is graduated in philosophy.
He began early to play the guitar and develops a rich experience that leads him to experiment, in over 20 years in music business, different types of styles: from pop to electronic, finding his own way in jazz, studying in the prestigious Siena Jazz Academy writing orchestral arrangements with masters Giancarlo Gazzani and Bruno Tommaso.
He started his career like painter showing his artworks in an exposure called "Images" in june 2019 in Messina (Sicily) and in march 2020 he have shows for th second time there his paintings in an exposure called "Land & Sand" in the same art gallery "Arte Cavour".
___

He has performed in Europe and America, in the big cities.
In Italy he performed live by side of famous names of the Italian national scene.
He has also performed at prestigious jazz clubs in the world, among whom we can mention: Vibrato (Bel Air, Los Angeles), Cafe Cordiale (LA) and in London at “Ain’t Nothing But Blues Bar” in central Oxford Circus.
He had the opportunity to enrich his experiences playing in jam sessions with some of the most important worldfamous stage musicians including:
David Garfield (keyboardist of George Benson), the bassist Jimmy Earl ( (bassist of Chick Corea, Pat Metheny and more), the drummer Steve Ferrone (Eric Clapton, Duran Duran, Paul Simon, Bob Dylan, Bee Gees, U2, Slash. Pooh, Pausini) , Morris O’Conner (guitarist of Earth wind and fire), Leddie Garcia (percussionist of Carlos Santana).___

Nino Siragusa is a 360 degrees creative and he expressed his talent in other arts, including photography and video. Director of most of all of his videos, he also made the videoclip of the singer Elisa Smeriglio (member of Sei Ottavi, the star band of one of the editions of X Factor Italy).___

His thirst for knowledge led him to investigate every aspect of the music, among them the sound engineering, becoming an expert in the audio industry, working in Milan also with Alberto Bonardi (sound engineer of Eros Ramazzotti, Laura Pausini, Fabrizio De Andrè) mixing the single cd “L’illusione” broadcast on Italian national radio networks and on television. Nino is also the director of the videclip.___

Since 2011 he devoted himself to his personal interpretation of the great classics of the Great American Songbook (recognized worldwide as compositions of a level of musical sophistication that has not yet been equaled), arranged them for guitar and voice.
He is ambassador in the world of the most important pieces of Italian culture, arranged in jazz style, which he spreads with his warm voice and his virtuoso guitar technique, making use of the particular gift that distinguish him consistent in playing different melodic lines simultaneously with voice and with guitar, demonstrating a great independence.

Watch A Video About Antonino Siragusa