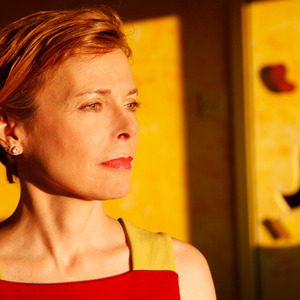 I express the light and the dark through the use of a full, bright, color palette. It is essential to me that each piece contains both. In this blend, my work creates a safe place for viewers to access the full spectrum of emotions. In allowing them to rise to the surface, we can reach a greater acceptance of the dark that resides within. My work rests in the place where loss and hope hold hands, at the intersection of joy and sorrow.

I create personal, intimate works, that tell my story in the form of installations, sculptures, paintings, and collages. Largely autobiographical, these pieces speak of our universal state of imperfection and how it binds us together. We do not cease to make mistakes and therefore, exist imperfectly and it is this which we share, that my work addresses.

I like to juxtapose patterns, textures, shapes, materials and colors. By mixing together that which does not belong, a peace is established.

Apryl Miller, daughter of a minister, was born in Chicago and grew up in the Pacific Northwest. She credits her art career to being raised in a large, creative, DIY family and her work reflects the tradition she was taught as a child, that of making something your own, by making it yourself. A lifelong poet, she came to visual art later in life, when the apex of her background resulted in crafting a home for her young daughters. This space has been described by Salon.com as "one of the most immersive, intricate, habitable art installations in the city...it is extremely important when looking at the history of immersive art installations". Like a magician with an endless silk scarf, she has continued to produce with an unabated creativity.

Ms. Miller's work has been showcased on MTV and on 4 different HGTV shows. She was profiled, in 2012, by Hyperallergic and Milk Made of Milk Made Studios. Her work has been featured in national and international publications including, Working Mother, ASOS, The Sunday Times Style Magazine and Kontsvarlden. A popular lecturer, she has spoken extensively on her work to The Princeton Historical Society, Docents of NYC, Bates Technical College, The University of Missouri and most notably, Open House New York.