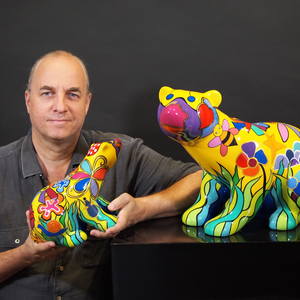 Born in 1965 in Paris, Arnaud Nazare-Aga developed a passion for modern sculpture and architecture since childhood. He was constantly visiting museums with his parents. He was educated in a Tibetan Buddhist community in Burgundy and later became a trained plasterer-molder. Arnaud designed et realized many carved decorations of Buddhist temples in the West, such as the Temple of a Thousand Buddhas near Autun (France) and Paris. He worked at the realization of the 3 monumentales sculptures of Buddha inside the temple with artists from Bhutan.
After many different professional experiences in Europe and Asia, he has founded the PAJ'Art Studio in January 2011 in Bangkok where he's living. In 2012 Arnaud created, Pop Art collections with the collaboration of his ex-wife, under the duo name, Artheline. The collections are known for their fun, brightly-colored and voluptuous Sumo, Hippop'Art, Whale Pop, Goril'Pop and goddess sculptures that bring childlike joy to viewers. In 2015, the Hippop'Art exhibition at the Fullerton precinct in Singapore, where over 40 hippos took over the hotel's gardens, lobby and the quays outside.
His most important art project is making the Little Prince art pieces inspired by the most widely-known French literary work with poetic and philosophical significance, accessible to the blind. Through the sense of touch, the visually impaired are able to "see" his sculptures in a kind of induction to the world of art.
In 2013, he was approached by Nicolas Delsalle, secretary-general of the Antoine de Saint-Exupéry Youth Foundation, to bring the water color illustrations of the Little Prince to life in tactile three-dimensional form. Illuminated by black UV lights, the statues appear to glow in the dark and are accompanied by movement-triggered audio descriptions. An exhibition intended to raise awareness of visual impairment, sighted visitors have the opportunity to be blindfolded and are encouraged to touch the artworks.
The fruits of Arnaud Nazare-Aga's labor were showcased in May 2015 at two world-premiere art exhibitions in Singapore presented by the Antoine de Saint-Exupery Youth Foundation as part of the French cultural festival, Voilah!, organized by the French Embassy and Institut Français in Singapore. Then this exhibition was setup in Pacific Place Hong Kong from 25 November 2015 and until 1 January 2016. The tunnels where the collection adapted for the visually impaired was presented had 124,000 visitors in 38 days. Then in May 2016 the 2 Little Prince exhibitions were presented in a national museum in South Korea, Gyeonngi Provincial Museum for almost 5 months. The next exhibition will be in the Singapore Philatelic Museum for 10 month starting on 7th June 2018 until March 2019.
One of his latest work is the Sumo Totem: the 3 different Sumo placed on each other. The symbolic is the stability and security for the first one, the open mind for the second and the third one, on top, represents the adventure of the life.
Arnaud is about finish the creation of the B'Pop Collection, 3 models of bears in different positions : Dancing B, Sitting B and Lazy B. Each of them are in 5 sizes and several designs. Arnaud Nazare-Aga's work is presented in many international fairs and galleries in Asia and Europe since 8 years.