Connections that allow electrons to move a near-light speeds. Like electronic neurotransmitters, they transfer valuable information from one neural location to another. Their schematic drawing remember the first artistic manifestations of the prehistoric man, but that on the contrary correspond to his last evolutionary stage. Microspaces created by man or by robots programmed by him. Strokes suspended in the emptiness, which with its questionless plasticity and expressive force create forms and spaces charged with symbolism and significance. Suggested concepts and evoked sensations: fragments of landscapes, faces, vegetable elements, etc., which I rescue from this technological microcosm. www.antonioromeo-fineart.com 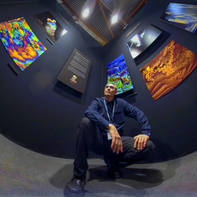