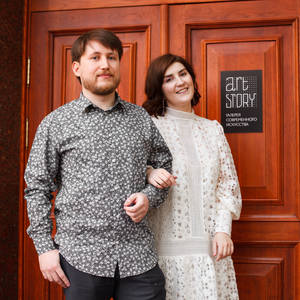 About Andrew and Ani Abakumovs

Ani and Andrew Abakumovs firstly saw this technique, when they got
acquainted with the other artist’s black and white works. They asked
themselves: is it possible to make a colorful art-object in the same
manner? Nobody did it before. Andrew Abakumov, who is a talented
mathematician and programmer, creates a unique algorithm, then he
prepares the “canvas” by driving in nails. And after that, Ani
Abakumova pulls on treads for hours, days, weeks, and months – that is
the way how the image gradually appears. The reach number of tones is
most likely made by a little number of colored treads: the color palette
expands significantly because of numerous crossings and layering. By
the way, it is interesting to know that it takes about 4 kilometers of
threads to make small round art work. And if to speak about a big
one, it usually takes 20 kilometers of threads.

Just like all artists, Abakumovi’s started their artistic path by
making endless copies of world-known paintings. To be more specific,
they referred to Pre-Raphaelites, who often used photos in the initial
stage of work. Main sources of inspiration for Abakumovi were “Lady
Lilith” by Dante Gabriel Rosetti and “Dolce far niente” by John
William Godward. Ani explains: “These works are so filled with
emotions, that it is doubly interesting to re-create them with treads…
From a very young age, we all are considered by social obligations
and inner anxiety (we are thinking about school, university, job,
family circumstances, and more global things)… When I firstly saw
“Dolce far niente” I felt that carelessness. I often return to
Godward’s painting to catch that feeling even for a moment. First of
all, I wanted to create an art-work with a therapeutic effect. Like
Matisse, who painted many joy things during the war. In my opinion, art
is not the only reflection of reality, but it is also a way to run away
from it, to relax, to recover”.

Ani and Andrew Abakumovs artworks are not only about female beauty
but also about the state of mind. While choosing the subject, artists
prefer characters that convey emotions: calmness, love, and joy. And
they offer the viewer to stop, to feel the moment, and to forget about
the crazy rhythm of modern life.

Art-works, that were made for the current exhibition, is based on
vintage images, that were taken from an old album of 1910th and
1920th. Artists found the album in Paris, while they were walking
through one of the flea markets. That was the thing that pushed
Abakumovs to the new chapter of the development of their artistic system.
The authors of the project decided to give a new breath to these images,
to revive vintage cards. They became more complicated and multilayer,
but remained light and attractive.