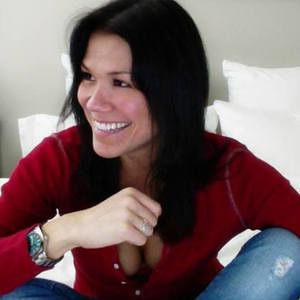 I’m a self taught painter who got her start in the early 90’s in NYC … I was just a kid, but it was pure energy. I totally felt surrounded by creativity… used to enjoy roaming the city in search of street art and it all fascinated me… they were all amazing artists. The feeling was free and it told a story… they were the voices of people that were underrepresented.

Basquiat & Haring were definitely artists that influenced my thought process during that time… In my opinion they had quite a bit to do with elevating street art. It gave me a base to create my own style. I do prefer oil painting on large canvas as well as painting on the floor. It gives me a sense of freedom to glide around the canvas and look at it from different angles.

My interest in designing had me juggling both senior year in High School and training at The French Fashion Academy in New York City. I attended Parsons School of Design and was shortly introduced to the music industry. There I met Pioneer Hip Hop Photographer, Al Pereria. He suggested my artwork as backdrops for his photo shoots. Soon after, my paintings landed in magazines with recording artists, Schoolly D, MC Ren, YoYo, Tevin Campbell, Wu Tang Clan and more. Al Pereria is a wonderful photographer and I’m very grateful for the opportunity and exposure he gave my art behind such amazing artists.

I am a native New Yorker. However, I currently live and work in NYC & Barcelona. I am currently the CEO and Creative Director at Queb; a small boutique firm which centers on marketing and promotion founded in 1999 by me and best friend Golden-Age Hip Hop Lyricist Lin Que… now a brilliant writer and director of film.

Through the years, living abroad and experiencing different cultural environments are major influences. “Painting is my life. It lets me express my everyday… whether inspired by someone… something… somewhere… a moment”.

Artist featured by Saatchi Art in a collection curated by Rebecca Wilson inspired by Basquiat.