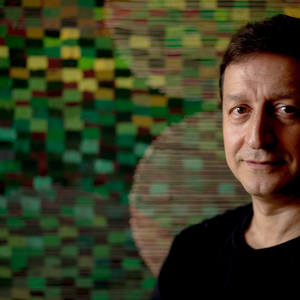 Colombian artist, architect graduated at "Ecole d'Architecture Paris Val-de-Marne", Paris.
After long and intense professional activity in Europe, he abandons the accuracy of old-world labor pyramids and lands in Curitiba and Maringa, cities where he has been lived since end-2006.
The work as a visual artist has been dormant during the years of residence in Europe, having risen brutally in the first few months of residence in Brazil.
Since then he have lived an intense creative routine, which result is an extensive collection of works made on Brazilian soil.
In the last decade, living in big cities like Caracas, New York, Paris and Barcelona were also fundamental to mature his own concepts in visual arts and then, finally, it was Brazil and its multicultural reality, the catalyst for a real creative explosion .
He participated in several collective shows and exhibitions and held to date four individual former positions on Brazilian soil,.
At 2015 he is developing content for a project-named "water, tierra, Air and fire, power elements"