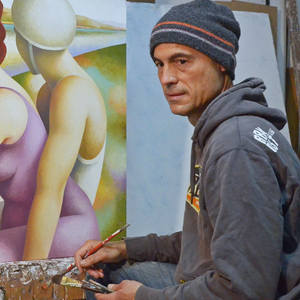 Fabio Hurtado is a Spanish painter and photographer born in Madrid in 1960.
He graduated from the Fine Art School of the Complutense University, Madrid . After three years of teaching experience he finally started painting professionally in 1988. From that moment on his presence in international art circles has been constant. He was awarded membership of the Rome Academy of Modern Art in 1996 and as well as other numerous prizes, Her Majesty Queen Sophia of Spain presented him with a Medal of Honour at the BMW Painting Contest. He was invited to participate, together with some of Spain’ s most important artists, in an exhibition to celebrate the 25 th Anniversary of the Spanish Constitution. Furthermore a stamp collection was issued featuring six of his paintings with the subject “ Women and reading “. His paintings can be found in the permanent collections of both The Ulster Museum, Belfast ( Ireland ) and the National Museum of Fine Arts, La Valletta ( Malta ). The Finantial Times Telecom magazine and a special edition of La Vanguardia newspaper featured Fabio Hurtado’ s work as the front cover . He frequently collaborates with non-profit organizations in Europe and Asia which construct school and fund education.
A retrospective exhibition took place in 2017 at Civica Galleria di Palazzo Rocca in Chiavari ( Italy).