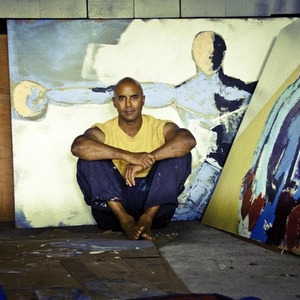 Kevin Brewerton is an artist who creates through the eyes of a fighter. After winning five world kickboxing championships, Brewerton turned to art as a way of expression outside of the ring. "Fighting is an art form, life is an art form. Everything is art..."

Brewerton made a name for himself as a five time world kickboxing champion. His charismatic and flamboyant style captured the imagination of his peers and kickboxing fans around the world. Martial Arts Illustrated wrote: "If anyone in the sport of Karate hasn't heard of Kevin Brewerton, then they must have been in a coma for the last ten years. If the sport of kickboxing karate was a sleeping giant, then it was Brewerton who came along and woke it up." Whether martial art or abstract art, it's all the same to him. Brewerton's philosophy that everything is art leads him to explore various mediums, which includes film. His provocative silent short film Metamorphosis, which he wrote and directed, won grand prize at the 2008 Richard Lawson Film Festival.

"I grew up hating art," Brewerton says. "I didn't understand it. Growing up in a coal mining town taught me that art was only for the rich. So, I resented it. I thought it was just pretty pictures, ridiculous empty canvases or abstracts that anyone could paint. I didn't realize that art is about communication and creating a mirror in which to see one's self."

Brewerton's influences have been from various sources. However, it was his time spent training under the famed Director and acting teacher Milton Katselas, where his art foundations were formed. "Milton taught me a lot of things. But one of the most important things that I learned is that it takes as much courage or more to be an artist than it does to win a world kickboxing title."

"Dare to be an artist is a motto that I took from Katselas. It's scary stepping into a boxing ring to fight. There's a lot of fear, but you have to move through it. Being an artist is the same, it's sometimes tough to reveal yourself, show your heart, show who you really are, but when you move through it you feel great. There's a rebirth. That's where fighting and art meet in the middle. It took me some time to understand this concept. When I first started as an artist, I didn't want to be vulnerable. I wanted to be impregnable and strong. As a fighter I'd been trained to keep my hands up, trying not to get hit by anything. But that's impossible in life. Art challenges you to reveal your flaws. It demands that things land on you so you can feel it. Now I try to keep my hands down and get knocked out each time I go to the canvas. We should all get knocked out in one way or another."