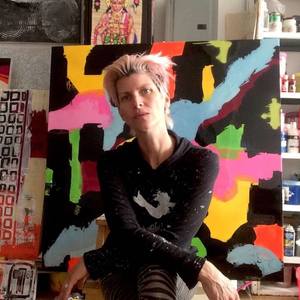 Bridget is a self-taught artist with a great appetite for exploration, self-expression fueled by an immense curiosity. She has been a full-time artist since 2010.
In her early career, Bridget’s multifaceted artistic abilities manifested themselves through performance art and acting, allowing her to explore emotional depths and exposing her to the global community, culture, and art. Today, Bridget’s canvases express the wealth of her collective experiences, the timelessness of her inquisitive nature, thirst for the undefined, and acceptance of the ever-changing. Exploration of emotion and the constantly-shifting universal fiber are fundamental values of her expression.

I paint intuitively following the flow of the moment. Sometimes in complete silence, other times with music guiding, most often working on several canvases at a time. At times I feel much like I imagine a conductor feels in front of an orchestra, the canvases are filled with different sounds, the paint and materials playout as either a section or the entire orchestra. To me, Life is art, full of contrast, and nothing in this universe is static. My approach is an expressionistic map of my experiences, curiosity, and explorations...most often in an abstracted metaphorical form. I feel art is infinite. I am at my best when I can go with the flow by listening to my intuition, evolving and discovering the many languages that give visual voice to moments in my life. ”- Bridget Griggs
The innate, explorative truth expressed by the visual dialogue of her painted works has attracted a vast private collector, and corporate clientele following and is sought out by the international creative and design communities. Recognized for her artistic virtuosity, Bridget’s works can be seen in numerous public spaces across Canada and the US, such as in the lobby of The Fairmont Hotel in Calgary, A large David Bowie-inspired mural beside his families home on Lafayette St. NYC, Odgers Berndtson at the Royal Bank Plaza, Toronto, Totum Fitness Life Science to name a few.
Bridget stays constantly creatively engaged whether traveling across the globe in search for the new frontiers of exploration, or in her native Canada where she paints in her treasured studio space located in the Roncesvalles Village – one of the few remaining artist warehouse spaces in Toronto

Her paintings are regularly featured and sold through Saatchi Art, fulfilling her goal to connect with a global audience.

Since 2010 Bridget has been a full-time multidisciplinary artist.

~Link to BBC Radio 4 interview Life On Mars aired Jan, 9th/21~ Pure gratitude...like bookends I'm at the beginning & the end, sharing how I first connected with David Bowie's music and a bit about how the painting "There Is Life On Mars" manifested. Many thanks to Saatchi Art for connecting to a collector in South Korea.
Many thanks to BBC producer Maggie Ayre and journalist Jo Glanville for this honor & opportunity. xoxo
https://www.bbc.co.uk/programmes/m000r33c?fbclid=IwAR3SXY5h4SiDJUtbanifFq09xb7ryHF9VmQ-uUzYbk4-iDLY74Qc8MRCrq8

THIS May 3-6th 2018 Bridget will be exhibiting a new series of paintings at http://nyc.theotherartfair.com in Brooklyn, NY