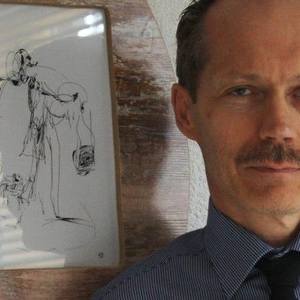 Erwin Bruegger has just retired from the world of work to devote himself entirely to the arts. Early on, he was interested in the beauty of nature and the general. He wanted to travel the world and therefore learned some languages. As a 21-year-old, he moved to Brazil to give children in a home some of his job as a carpenter along the way.

Back in Switzerland, he wanted to learn to express himself better artistically, to make the beauty of the world visible to all. He attended drawing and painting classes at the Neue Kunstschule Zürich. Since then, he draws and paints in his free time, where he can live out his independence and artistic freedom. He works intuitively, from the moment he does not commit himself and can be himself. The human figure always remains an issue and combines playful impartiality with serious search. So you will find in his work a wide range of Figurative, works à la Jackson Pollock, then to digress to Surrealism; fed from the subconscious mind .

The overabundance of the stubborn creativity proves that he goes his own way and has always gone. Look forward to it.

He participated in many exhibitions in Switzerland and abroad. He has publications in several art magazines and art books. It hangs a work in a museum in Denmark and two in Las Vegas. He has sold works in Switzerland, Italy, France, United States, Canada, Brazil, Netherlands...

I need to empty my galery. I'd like to share my works with you, so I lowered the prices now, but feel free to make me an offer, for every work you'd like. Thank you.

Since 1993 I exhibit in Fribourg and nearby and since 2001 as a member of the kunstforuminternational.ch every year in their gallery, in Italy and in art fairs in Salzbourg, Austria and Reggio Emilia, Italy.

There are articles about me in the following magazines:
Futuro, December-January 2006/2007, Switzerland
Artgate, March 2012, Switzerland
Art & Design, May 2016, France
Current Masters II, 2016, USA
The Best Modern and Contemporary Artists, 2016, Italy

I have two "Certificate of Excellence" from artavita contests
"The Honorary Award of Distinction" from Art Addiction, Online Gallery