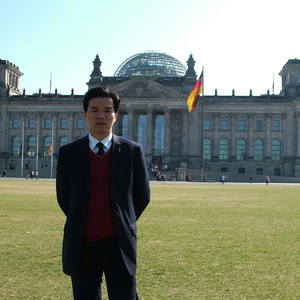 Since 2000's, Wenqin Chen has used Chinese calligraphy, sculpture and installation to explore the relationship between life, art and their diversity. He created the work "Human Civilization, Spirit And Strength" (2004 MA final degree show). The beings of life, the analysis of our current living environment tensions and the wonder of the human experience have set Wenqin’s intellectual inquiry. He explains: "When we recognize this resource of life, we will then cherish it.”He also uses some readymade directly into his own artistic forms, through combination and installation showing its meaning. The representative art works of this period are: “Speciment” (2007), “Kang?!” (2007) and “Up Side Down” (2007) which won the runner-up of the annual competition at British Saatchi Gallery in 2009, etc.

While contemplating the origin of life, Wenqin Chen became fascinated and inspired by the forms of the human baby and created a series of works inspired by it. As an example, the instalation of work "Your Turn"(2008), he explained: "The great life is growing in the competition,”and the “Life Posture”.During the following year (2009), he created the work of “Standing Egg” which realized his thought: "Can we then push the thinking of the origin of life forward? Thisthought advances our understanding of the life cycle and distills its meaning with the simplicity of an embryo.” For all of time, the egg and the embryo are the most enduring and significant beings existents and are at the basis of perpetuating life itself. As a source of inspirationand research Wenqin Chen studied extensively the human body, various scientific journals and statements, real life examples, and countless images. Examples are illustrated in the series of works“Before A Baby Comes Out Of Its Mother's Body” (2011-2015) and "Beautiful Evolution" (2013-2016).

In analyzing the life body with its infinitepossibilities, Wenqin Chen’s subject of enquiry emerged. Of equal importance, he is passionate about the dialog created between the positive and negative spaces that surround his work. As a way of expressing “the energy of space,” he emphasizes the momentum of the object to symbolize life’s release or “birth,”while extending the implied energy field to its largest range. The representative works are: "pregnant" (2001), "Endless Curve" (2009)(which won the Public Speaks at the Broomhill National Sculpture Prize 2011 in UK), "Moving" (2012), "Extending" (2014), "Dropping" (2014), "Story Beginning" (2015) and a series work of "Be In Here" (2015).

Within his exploration of the life, the egg is reduced into its essence as atoms, molecules, or cells. When combinedwith things or objects, a physical or chemical reaction occurs which has been the basis for these sculptures: “Is It Mine”? (2013-2015),“Kissing”(2015), and“Belonging”(2015).“When we look at these structures under a microscope, each object has its own constituent elements alive, jumping and wiggling.” Sculptures inspired by this phenomenon are within a series of work,“Bring Out” (2009), which has been short listed for the inaugural Spitalfields Sculpture Prize in London, and“Love Forever” (2010), etc.

To further explore this microscopic physical event, Wenqin Chen is capturing it visually in two dimensional works.Paintings of bright colors bring rich emotion and vitality to the canvas. These representative works include: A series of "Stories Of Story" (2015-present), "Black Net" (2018-present) and "Red Yellow Blue in Net" (2019-present). These curves and lines of simplicity expressed with color diversity are not pre-designed. They are a visual representation through the process of comprehending and elaborating on the vastness of life.

"Everything has life, life is in everywhere." This is the truth Wenqin Chen consistently explores in his works. Along with this truth he continues to make works which will stimulate our psychological and physiological reactions.

Wenqin Chen was born in 1979 in Fujian, Zhang Zhou, where he studied at the Art & Design School of Fuzhou University during 1995-1999. In Sep. 1999 he studied at the Academy of Art and Design, Tsinghua University in Beijing before going abroad for a MA degree at the Winchester School of Art, Southampton University, UK in 2002. Since 2007 he has been teaching in Xiamen University. His academic pursuit, he bases in the Chinese culture and pursue an understanding of the western world and its culture with a main focus in European modern art.

Awards
2000 Attained the Third Prize of the international Snow Carving Competition in Harbin CHINA;
2009 Work of “Bring Out” has been short listed for the inaugural Spitalfields Sculpture Prize in London UK;
2009 work of "Up Side Down" trees won the runner up of the 4th showdown at Saatchi Gallery UK;
2011 work of “Endless Curve” won the Public Speaks at the Broomhill National Sculpture Prize 2011 in UK.