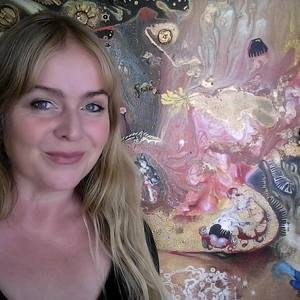 I'm a self-empowerment author as well as a multi-media artist (which includes being a painter, bass guitarist for Indie band, Templeton Universe, designer and composer). I originally come from the tip of Africa — Cape Town.

My art is a reflection of my inner workings and my passion for bright colours, form, symbology, fractals and sacred geometry — whatever stimulates me to unpack a vision onto canvas with whatever medium feels right (which is why I continuously experiment with mixed media).

My drive is to bring something fresh, spirited, emotive and unique into the world.

I combine my love of art with my fervor to write and help others to get their creative juices flowing. I run my own site and blog. I have been a regular columnist for Conscious Life News (2012-2018) and South Africa's holistic magazine, Odyssey (2016-2018).

I work from home and live with my husband and two feline children in the bizarrely artsy and intriguing village of Barrydale (Klein Karoo) which provides me with infinite laughs, incredulity and moments of sheer awe and inspiration.

I have also been the art and crafts teacher at my local youth upliftment center called, Net Vir Pret (which is Afrikaans for Just For Fun) since 2015. Our main focus for these classes is to teach the children to make crafts from upcycled material.

I grew up and was schooled in Fish Hoek, a sleepy little coastal town on the Cape Point route. I took art lessons with local artist, Veronica Vincent, and later on — in my senior years of education — took extra classes at the Frank Joubert Art Center in Newlands where I pottered with ceramics and sculpture for 2 years.

After leaving school I became a qualified Interior Decorator through the Sheffield School of Interior Design and worked in a few local framing consultants/galleries and art shops.

In 1999 I left the art world in pursuit of music and joined a band called The Bends. We brought out 2 CD’s — ‘7 Days’ and ‘Uncomplicated’ before we decided to move to the UK. I'm currently the bass guitarist for the South African indie/alternative/rock band, Templeton Universe. We successfully over-funded our album (146% funded), 'Between Lies' (2017 release) via Indiegogo Crowdfunding (www.templetonuniverse.com) and are currently in studio working on our next release.

After a 3 year escapade to the English countryside in 2002, I rekindled my love for art and started to paint and sell my work online — a new cyber adventure that would later prove to be the most incredible career move of my life.

I returned to my homeland in 2005 and started painting and selling art online full-time.

In 2010 I wrote my first self-empowerment novel, ‘Divine You — Redefining Love in the New Earth’, and it was accepted for publication by publishers in New York. My second novel, ‘Carpe Diem or Bust — A Spiritual Guide to the Good Life’, came out in 2013. I have also self-published 2 table books ('Creative Expression - How to find your inspiration...' and 'Art Portfolio: Cherie Roe Dirksen') all of which can be found at Amazon or any leading bookstore.

In 2009 I brought out my first mood music instrumental CD called ‘Nature Calling’ (available at Amazon and iTunes).

Other chronological features include:

'The Times' newspaper, 'Under the Hammer' by Lerato Matsaneng, November 2009

Graduated from the Sheffield School of Interior Design, New York, 1996-98