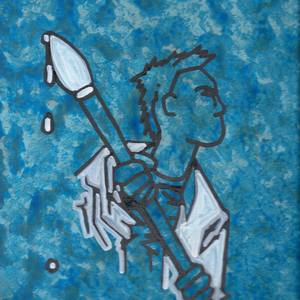 Juvenal: Facit indignatio versum.
Aristophanes (from "The Knights") revile the rascals with satire is a good thing, in hindsight, it means onoare honest.
G.Sartori: If not exceed, if not overtaking and bypasses, you do not exist today. At the risk of not existing I choose to resist.

I was born on 03.06.1983 in Turin, where I live and work in the Social, with Rigazzi with cognitive delays, autism, asperger, psychiatrists and disabled, at a Cooperative as Artistic Advisor as part of an exhibition.
I have the need for a figurative painting more explicit and more related to the social reality of our time, described by means of the representation of images.
In a world where "the power of the images" is highly invasive, my works become (like the rest of the evolution of my artistic) visual communication tool and social analysis of the political situation and global.
Reflections and observations arising from mental elements of the real and the socio-historical context-global "company image" are transformed into figurative compositions in a symbolic and iconic, resulting in a year-critco satirical between art and society.
In order to create a form of investigation on the current reality in the form of historical memory.

Education and training
At the State Institute of Art "Aldo Passoni" Turin I obtained the Diploma of Master of Art
in the school year 2000/2001 and the Diploma of Applied Arts in the A. s. 2002/2003.
By sending my work and a subsequent interview I got the opportunity to enroll
at the International School of Comics in Florence (classes limited number) on the first year of the
specialization techniques cartoon, conseguendone certificate at year end.
In March 2008, at the Academy of Fine Arts in Turin I graduated
Quadrennial with a thesis on: Analysis and Fundamentals of Satire: The Criticism and its aspects
communication with the evaluation of 100/100.
In March 2010, at the Academy of Fine Arts in Turin I graduated from
Specialization at the end of the MA Degree in Painting, with a thesis entitled: The
representation for images, its symbolic value and icons as a means of
visual communication and social specialization in Art Criticism and Methodology
Contemporary, with the evaluation of 110/110 with honors.
In May 2014 I obtained at the Foundation of Turin Feyles the Certificate in "Workshops
Expressive Applied to Educational Interventions "
illustration course at the Comix International School of Turin
I continue in my artistic research and teach Art and Support to disabled children at Lower Middle Schools in Turin

- March 2004 Small format works at the Princess Isabella Cultural Center in the
exhibition "Albertina Isabella".
- June 2004 Painting Symposium: Ateliermaglio at the Cortile del Maglio.
- September 2005 participation in the National Painting Prize "Luigi Brambati Humanity e
Painting "second edition with relative catalog.
- November 2005 "Paratissima"
- May 2006 exhibition "Figurazioni Oggi" at the Lucano Giustino Cultural Circle
Lucky.
- June 2007 exhibition at the Turin Conservatory, 6m x 6m canvas.
- July 2007 exhibition in Milan at the Guicciardini space in the "Intersezioni" exhibition.
- October 2007 participation in the "Paratissima" event at the former Le Nuove prisons in
Turin.
- November 2007 exhibition at the former "Le Nuove" prisons as part of the Ars exhibition
Captiva: paths of creative liberation with relative catalog.
- April 2008 permanent exhibition at the Milan railway link.
- May 2008 - personal exhibition at the Circolo Culturale Dr. Sax.
- July 2008 - realization of the public art intervention project, “Un Ponte di
Communication "with the participation of the" Valdocco animation cooperative "area
Stadio Delle Alpi, via Altessano, through the municipality of Turin.
- August, September, October 2008 - exhibition At Cafè 21, Piazza Vittorio Veneto, for
the creation of new labels for Absinthe bottles.
- August 2008 - International Workshop "Real Presence" in Belgrade with related exhibition
at "House of Legacy".
- September 2008 - Workshop "Real Presence" at the Museum of Contemporary Art
"Castello di Rivoli" with its final exhibition inside the Long Sleeve.
- September 2008 - Realization of "Artist's Pen - Pen Parej, for the 50th anniversary
linked to the event "To Be Settimo".
- October 2008 - Workshop with Matthew Barney at the Merz Foundation with related
catalog.

exhibitions - events from 2009 to today
- January 2009 - Collective exhibition at the Cavallerizza Reale in Turin.
- January 2009 - Work selected as part of the artistic performance / competition included
in the "Ab Sin The 21" catalog held at Cafè 21.
- January 2009 - Selection at the Academy of Fine Arts in Athens within the
Mithos - Shakespeare project. Video entitled "Play-Shakespeare".
- February 2009 collective exhibition at the Ambarabar in Via Borgo Dora, Turin.
- April 2009 exhibition at the first edition of "Biennale della Democrazia 2009" at the
Officine Caos with its catalog.
- May 2009 Staff at the Cavallerizza Reale
- January 2010 Exhibition entitled "Dreams" fine art comics, exhibition at the Academy
Albertina of Fine Arts in Turin, graphic art exhibition spaces.
- July 2010 Collective exhibition "Art on the banks of the Arno, International Small Festival
Formed at the GAMeC, Gallery of Modern and Contemporary Art, Art Gallery
CentroArteModerna di Pisa, curator Massimiliano Sbrana. - July 2010: Exhibition at the Municipality of Sondrio, in the Scarpatetti district as part of the
of the "ScarpatettiArte" Exhibition-Competition
- September - October - November 2010 - CORPIFUTURO Exhibition (project conceived by
sculptor Piero Gilardi) as part of the initiative to celebrate the thirtieth anniversary of the
Valdocco Animation Cooperative. From September to November in the squares of eleven municipalities
of Piedmont.
- January - February 2011 - Exhibition of the Mini painting and Mini sculpture at the Gallery
of modern art "Alba" in Ferrara, edited by Roberto Puviani, with relative catalog
- February 2011 - Contemporary art exhibition for charity, organized by Daniela
Arionte from the gallery “Behind the scenes art” and from Dr. Sara Pettinato, president
of the non-profit association "Agate woman for women" entitled: "Agatarte - The breath
of the soul, Agatarte - The breath of freedom ", Palazzo della Cultura - Ex Convento S.
Placido, Via Museo Biscari 11 and Via Vitt. Emanuele 121 - Catania
- November 2011 - Paratissima - Turin
- February 2012 - Contemporary Art Exhibition entitled "Art without a Mask" by
Daniela Accorsi, in the Corto Maltese House - House Museum - Venice
- March 2012 - Collective Exhibition on Drawing and Sketch entitled "SKETCHIKA" edited
by Daniela Accorsi, at the Spazio San Giorgio - Bologna
- April / May 2012 - Contemporary Art Exhibition entitled "Lirica Materia" curated by
Daniela Accorsi, at the Emma Infante Gallery in Turin
- April / May 2012 - Contemporary Art Exhibition entitled "Gesture and Color" by
Daniela Accorsi, at the Punto Arte Gallery - Modena
- May 2012 - Contemporary Art Exhibition at the "AccorsiArte" Gallery curated by
Daniela Accorsi - Turin
- July 2012- StreetArt Exhibition / Event, within the "BLOOM" Competition / Festival, at
conquest of the public space "Second Edition, for the Finalists only, in the Urban Territory
of San Vito di Leguzzano - Vicenza
- July 2012- Collective Art Exhibition within the First Edition of the "Les
Couleurs de amo '", at the exhibition halls of the Villa Magdalena, Villa Artistica located in
Nice, France, French Riviera.
- October 2012. Collective Art Exhibition, at the AccorsiArte Gallery curated by Daniela
Accorsi
- May June 2013 - Contemporary Art Exhibition "Artifact 2013 - Soft Power" at
Palazzo Costanzi, Trieste, after selection.
- March 2014 - Exhibition at the "Casa dei Carraresi" Gallery in Treviso as part of the Award
ARTPROTAGONIST2014 International Prize for Contemporary Art, as a finalist
- December 2014 - Work selected in the first edition of "The Time is Now
"Creative Arts Contest 2014, virtual exhibition at Istao (Ancona) in December-January.
In May Exhibition at the Olivettiano Culture Festival
- April 2015 Tris Exhibition by Outsider & Insider Artists within the MAI Project
VISAS AND OTHER STORIES at the Ingenio Contemporary Art Gallery curated by
Taramino tea. turin
- 2016 Personal exhibitions inside the "Sovietniko" space via Cibrario, Turin