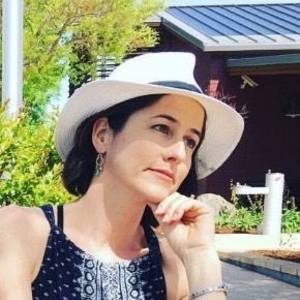 My works are always nature-inspired and nearly always monochromatic. Each one is an immersion in a single color, an ode to that shade. The Japanese have the expression "forest bathing" and I engage in a sort of "color bathing." To me, many colors is visually noisy. An image of shades of just one color exudes calm, balance and focus.

Having spent a decade carving block prints and practicing monochrome photography, monochrome is how my mind works. I focus on one color at a time, the balance of positive and negative space, patterns, lines and cutout shapes.

I am attracted to monochrome, much like the Colorfield painters of the mid-twentieth century were, and to other abstract painters who worked in monochrome and pattern like Alma Thomas, Simon Hantai, Agnes Martin, Anni Albers and Joseph Albers.

My recent abstract acrylic paintings of monochromatic patterns have a heavy contrast of positive and negative space in the way that cut paper collages and block prints do. I actually hand-cut the shapes out of adhesive masking film first and then decide the arrangement, rather like a mosaic on the blank canvas. Lastly I paint over and around the masked areas with either transparent ink or opaque paint. What begins as a collage ends as a painting.

The result of this method resembles a large monoprint or silkscreen on canvas, but a silkscreen whose stencil was constructed of 200 separate tiny pieces rather than cut from a whole. My unique process was inspired by the years of printmaking I have done, especially monotypes and linocuts. But I also draw inspiration from the cyanotype process of capturing silhouettes of objects, West African and Japanese indigo fabric dying, Simon Hantaï’s folded canvas paintings, and Henri Matisse’s cut-paper collages of leaves.

I cycle between the three mediums of printmaking, collage and painting, applying aspects and techniques from one medium to the other. After years making woodcuts, linocuts, etchings and monotypes, I now use the medium of cyanotypes to mimic techniques of multi-plate prints and use my prints to create collages on panel.

My abstract paintings are in turn influenced by the repeating patterns in nature of my botanical prints and also by the highly structured geometric patterns in my collages of cut cyanotypes.

My paintings, cyanotypes, etchings, block prints, monotypes, collages, and stone, clay and bronze sculptures are held in private collections around the world in the United Kingdom, Spain, France, Germany, Australia and the United States. I live in Oakland, California, just across the bay from San Francisco, where I was born and raised.

Aeonian photography magazine
issue no. 4
May 2021

Featured in featured in Saatchi Art’s collection “Shop by Room: For the Office.” Spring, 2021.

Featured in Saatchi Art’s ‘Shop by Room: For the Bedroom’ collection. Spring, 2021

Featured in Saatchi Art’s ‘New This Week’ collection of April 12, 2021

Featured in Saatchi Art’s ‘New This Week’ collection of January 25, 2021

Featured in Saatchi Art’s ‘New This Week’ collection of August 31, 2020

Featured in Saatchi Art’s ‘New This Week’ collection of August 10, 2020

Featured in Saatchi Art’s ‘New This Week' collection of April 27, 2020

Featured in Saatchi Art’s ‘New This Week’ collection of February 3, 2020

July 10, 2019 "Conversations Through Art," an event organized by the North Carolina nonprofit Empathy Through Art which uses art to spark conversations about how to make our communities more dementia friendly. My donated painting about Lewy Bodies Dementia was displayed.

April 2020
The Ground Upon Which We Stand
Abrams Claghorn Gallery
Albany, California

May 2019
Looking Out My Back Door
Main Street Arts
Martinez, California