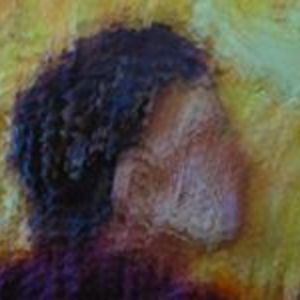 Christine received her training over 30 years ago at traditional long established Art Schools in Birmingham and London. She sees her work as following in the great colour legacy of Gauguin Bonnard and Matisse.
These are works of joy and peaceful optimism that
hold a powerful meditative presence.

I have a large quantity of work, which by degrees is maturing. Like a garden an area throws up its surprises then fades back. A painting may appear finished though its depths are hidden and only are revealed when conditions are right sometimes laying dormant for years.

Only some are shown here, space not available to photograph Paintings as they change.

To accommodate single and peripheral vision I cut and open out space onto the picture plane surface occasionally this is then tilt bent or split.

nb.Works on paper listed in lower case generally done quickly.In Upper Case are worked on more, hope that is helpful! I would not generally give titles to works on paper as they are most often done as workouts of problems in Paintings.

Fuller synopsis on work method:
About my work:
My Paintings come about over a period of years I work on at least ten at a time in rotation.
The impasto is partly a result of reworking and a desire to give substance to light itself.
The nature of the work has revealed itself gradually to me. The figures are a collective presence watching waiting or travelling suspended at the moment of and before arrival.
A theme of Active Passive Neutral corresponds with an idea borrowed from Rainer
Maria Rilke about a pure Platonic sight in blindness. Again taken from an idealization
of blind 8th BC visionary Homer.
The work presents itself seemingly as fragments or pieces in a jigsaw. These then form into groups or pairs and rest, or are dormant as other forces interject themselves.
I take from an absorption in nature sky and space; specific paintings, literature poetry and random observations, which I change slightly. To accommodate single and peripheral vision I cut and open out space onto the picture plane surface, occasionally this is then tilted bent or split. A decoupage relief has recently developed which then blends back into illusion on the picture plane surface.

Space to me has a certain density, which is rippled or distended by our movement or presence.
The texture of air too is altered by us and wraps itself around us as gravity.

Influences are the inverted perspective of Byzantine Icons some of the most striking examples are 14th C. Serbian and Greek Monastic Frescoes where the tension between stylised colour shape and spatial illusion generates a spectacular agony. Another important influence is in the 12thC. Japanese illustrated scroll of the Genji Monogatari Emaki. There are occluded views int

for 2016 Victoria Museum Liverpool: New works on paper have asked for September as there will be more people around!

Updates sometimes on the above sites. Apologies I hardly take photographs , images of work in progress would be interesting not least for myself.
Also so called finished work gets on my nerves and i end up reworking too often to reveal!

for Sep 2016 In preparation Liverpool Victoria Gallery & Museum Exhibition new works on paper
Working towards uploading a number of new and reworked paintings.
Also working on a set of larger Paintings than usual for Exhibition
on a theme borrowed from one or two Greek myths influenced by Titian
mid period & Poussin's small dark landscapes.