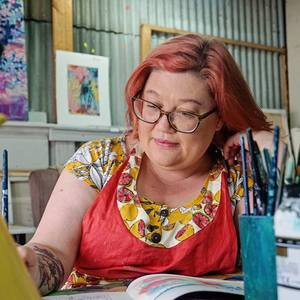 My goal is to create artworks that are visually beautiful, calming and organic. My paintings are highly decorative, however I feel they also serve as a reflection of the beauty and complexity that nature provides. I like to create art for real people to go into real homes that are a visual feast for the eyes and will be enjoyed for generations to come.

I am primarily inspired by the natural tangle of vegetation that can be found everywhere near my home in the Yarra Valley. My paintings are both a direct reflection of my surroundings and an imaginary world – a secret garden that exists in my mind. A whimsical place that I can go to escape and be lost within.

I begin with a combination of splashes, bleeds and runs in different colours that I then combine with finer details of foliage. I use repetition of brush strokes and natural motifs to create a consistent rhythm within the painting, which helps to create order in the chaos of colour. The contrast between the broad strokes and fine details creates texture and depth in the pieces.

My colour palate is governed by my mood and the general feeling I want to create within each painting. I generally work with analogous colours combinations because I feel they best reflect the natural harmony of nature, the subtle warm or cool changes of the seasons and foliage provide endless inspiration. However, I am not afraid of colour and I often experiment with combinations that are not usually traditionally associated with nature and landscapes.

I work spontaneously and rarely begin with a set plan in mind. I let each painting evolve intuitively as I build each layer of paint. I work quickly to begin with, which is why I prefer to work with faster drying acrylic paints. Each piece is then finished off with a layer of gloss varnish to enhance the colours and depth and also protect the surface of the painting.

I am happy to take on commissions, if you would like some information on pricing and how to go about commissioning a painting please use my contact form.

Represented by Established For Design Oct 1014

Represented by The Family Love Tree May 2015

Represented by Bright Art Licensing, London as of July 2015