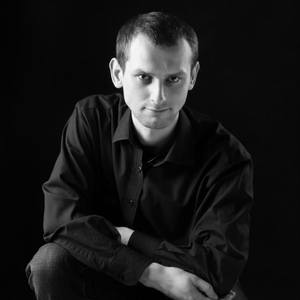 Cyprian Hołownia:
I was born in 1985 in Chrzanów near Oświęcim.
I spent my childhood in a small village near this town, as well as in Masuria
When I was 15 I lived in a boarding school of Art School. I currently live in Libiąż,
I've been interested in art since I was a child, that's why I chose education in art schools.
Until 2008, most of my work is experiments
I created drawing, painting, photographs and graphics works, in 2008 I became interested in the art Op-art, besides, I was interested in a broadly understood science, because of the interesting people I've met.
That is why in my paintings I present the discoveries of this world.
I try to illustrate the language of science, and I also portray great personalities of the world of science. This is the direction I will take over the next few years.
I am also preparing new geometric projects that will draw the recipients into interaction with the image.