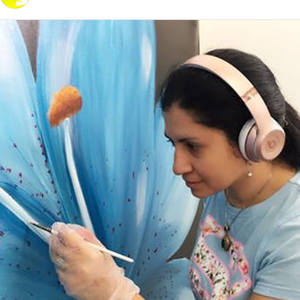 I am an artist and writer; born and raised in Cairo - Egypt, and currently based in Cairo. Graduated from faculty of Commerce - English department, majored in accounting from Ain Shams University - Cairo, followed by a Masters in Business Administration from Maastricht School of Management (The Netherlands) in 2007. I discovered my passion for art after a long career in banking and therefore moved to London in 2016 to study Masters in fine art - painting at University of the Arts London.
Since 2017, my works were included in a number of group exhibitions in Egypt, UK, China and India. In 2018 my works were included in the group exhibition “Contemporary Art of the Middle East” at the WetPaint Gallery, Gloucestershire- UK; which is the biggest middle eastern art exhibition ever held in the UK at the time. Also, in 2018 my piece (Cairo 1900) was selected for the Dafen International Oil Painting Biennale that was held in Shenzhen, China. Now (Cairo 1900) is among the permanent collection of Dafen Museum. In May 2020 my works were awarded the judging panel award for best artwork presented by "ThinkDesigner Art Studio" - India. In September 2020, my piece "Don't Fall Off the Cleft" was featured in Art Hole magazine - UK. And was featured in the Egyptian television and Woman of Egypt magazine
My first solo show was in July 2017 at the Egyptian Cultural and Educational Bureau in London - a magical place that was originally the recreational Palace of King Farouk, the last king of Egypt. And my second solo show was in Cairo in February 2019. My works are among public and private collections in Egypt, UK, USA and China and is amongst the permanent collection of Dafen Art Museum - Shenzhen - China. I am being represented by Janet Rady Fine Art gallery in London and Singulart of France.
I also studied neuroscience in Harvard which informed my current body of work.
What do I do?
My works are informed by neuroscience, however, they are not illustrations of the neural network, but rather an investigation into the human condition, I do this by exploring the similarities between the behaviours of the neural cells and those of mankind. Hence, my works investigate our daily lives, the daily happenings, human interactions and the experiences we go through. In my works I attempt to freeze and magnify those unnoticeable moments in time, I believe that if those moments are big enough, they can't go unnoticed. Hopefully one would lose themselves in the painting, it is a form of meditation actually.
I generally use oil as a medium, but I also play with acrylics and water colour.​
My works are generally medium to large scale, however, sometimes I experiment with 3D objects and miniatures.
In addition to my art practice, I write for Edaraty and Ingaz magazines in United Arab Emirates tackling self-development and organisational excellence.

For more about my practice and for the complete collection, please visit www.daliaatteya.com

2007 - Masters of Business Administration - Maastricht School of Management - The Netherlands

SEP’20 – Noise in Online Places – a collaboration project led by a fellow artist from Montenegro, featuring various artists from the UK, India and China. NIOP took part in the "Ars Electronica" festival