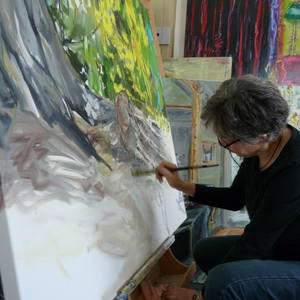 I currently work and live in the Eastern Townships, Quebec, Canada.
Over the years, my work has evolved from abstract to representational that lead to a new and freer approach into familiar territory, but the underlying motivation or intent has never changed: use painting as a means to be in the moment and enjoy the silence that sets in while creating.
I see painting as an exercise to go beyond all layers of fear and hope that prevent pure and free creation.

Work included in various private collections in Canada, United-States and Europe.
Over the last few years, I have added a ceramic component to my body of work. To see ceramic pieces, go to : https://www.etsy.com/ca/shop/daniellecaronpottery