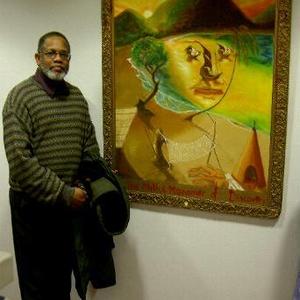 My name is David G. Wilson. I was born in 1953 in the English and French Creole speaking Caribbean Island, The Commonwealth of Dominica. I have been painting for over forty-five (45) years. However, my artistic inclination has been lifelong. I immigrated to the United States in 1976 where I obtained a bachelor's degree in Economics with a minor in foreign languages (French & Spanish). I am a self-taught artist whose interest in painting intensified on my arrival in the United States. By visiting the numerous museums at my disposal in the USA, I have been able to learn more about Art and Art History than if I had attended art school. I live in New York City with my wife of thirty-eight (38) years, Yvonne.


ANTHROPOMORPHIC PERCEPTION.
I paint in a style that I call "Anthropomorphic Perception." It reflects "An exercise in Ultra-Perceptive Plausible Juxtaposition." Anthropomorphic Perception demonstrates my cultivated ability to perceive hitherto unseen alternative realities within any image that I behold. The "mnemonic" objects and images that I perceive therein are reminiscent of the trinkets with which my African ancestors were equated. By strategically juxtaposing inanimate objects to create human form I try to graphically approximate the cruel and reductive equation to which slavery devalued the image of my African ancestors and it serves to illustrate the degree of dehumanization to which my ancestors were subjected. By strategically juxtaposing commonplace anthropomorphic still-life objects that collectively create a human form, I can portray the obvious humanity that the slave-master refused to acknowledge, but instead chose to see my ancestors as merchandise to be bought and sold at the auction. From childhood, my exposure to images of European art has left me with an unapologetic predilection for Western aesthetics. In short, I love European Old-master paintings and have had a life-long infatuation with the work of Leonardo da Vinci. In 1980, shortly after discovering the works of Salvador Dal, and by extension that of Guiseppi Arcimboldo, I read a quote from Leonardo,the artist who wishes to enhance his faculties for creative invention can stare at a stain on the wall and perceive therein, whatever he wishes to see. I was instantly taken back to my childhood when my mother was teaching my late brother, Eddie, and me to read. Wanting to assist my brother to identify the map of Italy, she gave him an unforgettable hint:Italy is kicking Sicily she said. I was shocked as I recognized the anthropomorphic characteristics of that map. In response, I volunteered my observation that Dominica, my birth-country looked like a penguin and the neighboring island, Guadeloupe looked like a butterfly. The objective of Anthropomorphic Perception is to seek and find unexplored spatial dimensions, in painting and sculpture, beyond the third dimension that Felipo Brunelleschi inspired with his discovery of linear perspective and Leonardo da Vinci's aerial perspective. The traditional painting styles that evolved from Brunelleschi's discovery, namely Classical to Post-Impressionism, have aided the human eye in correctly representing three dimensional spaces. My objective is to demonstrate that there exists within our three dimensional terrestrial space, dimensions yet unexplored in the visual arts. And so, the ultimate objective of Anthropomorphic Perception, painting, is to depict that other dimension using the reality of the two dimensional surface and the illusion of the third dimension to create another "plausible" other dimension, hitherto unseen within traditional three dimensional depiction of space. My quest is depict a parallel universe within our three dimensional world.

All paintings and sculpture on this page are copyright protected.