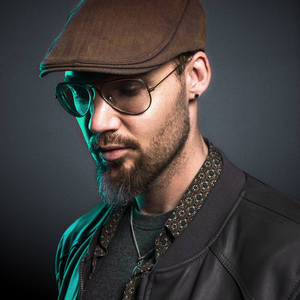 My name is Delic, I am a music-producer, painter and writer from the Netherlands. ⁣
⁣
When younger I was in a very successful hiphop-group here in Holland (Opgezwolle), playing sold out venues and festivals every weekend. ⁣
⁣
However, after years of touring I chose to withdraw from the spotlight, travel the world for a year, observe my mind and teach myself to paint.⁣
⁣
I felt that if I didn’t shake up my life and start new things, I might start to repeat myself.⁣
⁣
When I came back from my trip around the world, there turned out to be trouble with my taxes. The government subsequently laid claim on all my possessions and I couldn’t make music for years.⁣
⁣
I focused on painting and took small jobs; I had decided I wanted to become wholly independent and didn’t take help from people in the music industry. I started writing on a story too, which turned itself into an enormous project called ‘Kidnap At The Noodle Shop’.⁣
⁣
I wrote a story of eight chapters. Corresponding to these eight chapters I made eight paintings and eight songs. ⁣
⁣
This project was presented with an exhibition at the renowned street-art gallery 'GO Gallery' in Amsterdam and a live show at the ‘Melkweg Amsterdam'. Apart from ‘Mrs Fuentes’ and ‘Words’, the paintings sold out at the exhibition. ⁣
⁣
A limited edition series of 500 ‘vinyl-books’ was printed too. These 'vinyl-books' are huge, coffetable-sized illustrated storybooks containing the eight chapters of the story, depictions and sketches of the paintings and a physical vinyl elpee. ⁣
⁣
The story, the music and the paintings are alle written, arranged, recorded, mixed, painted and conceptualised by myself. ⁣
⁣
The vinyl books and the music are released on Delic Music, the label I run with my wife Huda, who also sings on the album. ⁣
⁣
We want to bring music and art into this world that lifts you out of your ordinary day and into a wondrous world. We take much pride in doing this in an independent fashion.⁣
⁣
You can listen to the album on Spotify.