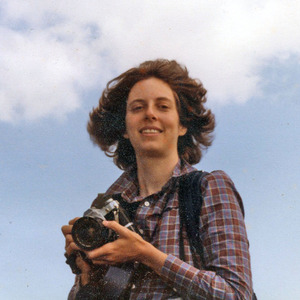 "Your photos are beautiful and represent such a powerful and passionate time in American History. I believe these photos will last and many years from now they will be looked at and studied just as Matther Brady's classic and haunting Civil War photos are today..."- Ron Kovic tribute for Diana Mara Henry.
Diana Mara Henry began her career as a photo editor and reporter for the Harvard Crimson, 1967-1969. After college she was a researcher for NBC news and a General Assignment Reporter for the Staten Island Advance. Going freelance in 1971, she photographed George McGovern -from the New Hampshire primaries to the National Democratic Convention, Bella Abzug and Elizabeth Holtzman. The most-published photographs of her career came as official photographer for the National Commission on International Women's Year to document the First National Women's Conference in Houston, TX, 1977.
Other extended reports include Vietnam Veterans, 1970-1981; election night in Plains, Georgia, 1976; Women Office Workers/Nine-to-Five, 1979; the Women's Pentagon Action, 1980; One-Room Schools and Schoolteachers of Vermont (shown at the Bratleboro Museum in 1984) and One-Room Schools of Ulster County, NY, and the Natzweiler-Struthof Concentration Camp, Alsace, France. She is a delighted one-year resident of Newport, VT and has found there her Shangri-la.