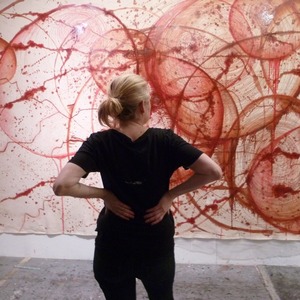 Originally from Brooklyn, NY, Dianne Bowen is a multi-media artist living and working in the East Village, NY. She studied at the School of Visual Arts, NY.

Exploring sound and the process of listening how and what we hear, Dianne Bowen delves into the depths of audible and inaudible conversations and information bouncing faster than the speed of light. Bowen's work is thoughtful, thorough investigations referencing time, internal and external space with a poetic eye. Through various mediums and techniques formally her work is about pushing the boundaries of Drawing as a medium and "the line". Conceptually, Bowen's work addresses the dichotomy between white noise, silence within nature and the loud constant banter of urban living in age with little or no barrier. There is no on/off button.

Dianne Bowen recently had a solo show "Dimmi Tutto: Tell Me Everything", at NINAPI' Gallery, Ravenna, Italy which opened October 13- November 3, 2012. Bowen's work is also now included in the curated AS Artist Studios database founded by Jill Connors. Her work is shown both nationally and internationally as well as reviewed in publications in print, on-line, live radio interview and a documentary on 10 artists in their studio "Art in Dialogue" screened at the Museum for New Art Parnu, Estonia in 2006. Most recently her work and process were featured in the online blogs HYPERALLERGIC, "A View From The Easel" by Philip Hartigan, http://hyperallergic.com/42311/a-view-from-the-easel/ , and PRAETERITA, "artist-writer-artist- Dianne Bowen" interview by Philip Hartigan on line blog, October 9, 2011, link: http://philiphartiganpraeterita.blogspot.com/2011/10/artist-writer-artist-dianne-bowen.html as well as Art in America, June/July 2007 "Girls, girls, girls" by Carey Lovelace pg. 90., and ARTslant NY 2010, "On the Edge at Fountain" by Natalie Hegert Pic of the month for March. Her work can also be found in The Drawing Center's curated viewing program. Currently, there are 2 books on her work available: "Back to the beginning and begin again..." selected drawings and installations 2006-2008 with foreword by Art Critic, Curator and Director of artcomments.com, Peter Duhon, Jr. Released, in 2010 and "A Fragile Conversation", with foreword and essay by Leah Oates, selected works. Released as a regular edition in 2011 and an archival edition in 2012.

A line, the simplest and most complicated of marks, the earliest marks made by humans in a cave.

I wanted to give you something, like a note in a drawer, a memory to keep with you for when you need it, a whisper in your ear, I'm listening. - Dianne Bowen