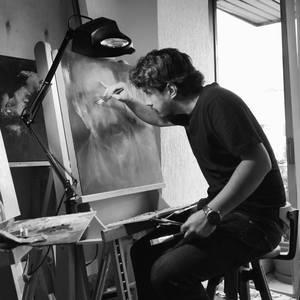 Trained in architectural know-how and techniques at the Mexico National Autonomous University, where he graduated in 2004, Eduardo pursues his training for one year at the University of Minnesota in the U.S.A. Furthermore, being an adept at photography and painting, he began his career as a freelance, in order to maintain the freedom to practice his know-how in each of the disciplines he loves.
Based in London, this multi-disciplinary artist works on the development of his works in a number of complementary practices. The main focus of his approach is on how to represent his models in relation to the impact they produce on the artist’s interpretation – with their pose or their gaze –, and at the same time on the resulting influence on the viewer. By mastering the light with his camera lens, the artist adapts his framing to the statement he wishes to defend, to the maximum tightening his gaze upon the subject and leaving out the superfluous. Since photography and painting unquestionably go together and influence each other, Eduardo applies a similar methodology to his pictorial activity. In this way, he uses oil to focus his attention on faces, whose materiality and presence irradiate the whole composition. In order to step back from his work in progress, Eduardo likes to produce his works over a number of days and thus ensures great objectivity in their execution.
Both in the conception of his photographic portraits and in his imaginative paintings Eduardo undertakes minute observation of anatomy, physical details that represent the individuality of each human being, being sure to identify what differentiates one from the other.