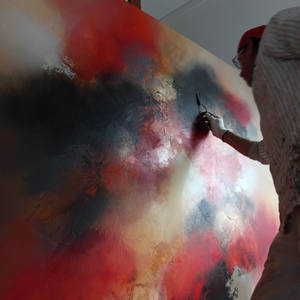 Eelco Maan's compositions in colour can be compared to musical arrangements. Strong contrasts are blended exemplary and with a superb sense of harmony into a unity of subtle variances. His paintings possess a fascinating, mysterious quality which occupies a world of their own, an indescribable world which by far transcends our rational existence. His story begins when words are superfluous.

Eelco Maan has been working as a visual artist since 1994. Initially experimenting with figurative, Fauvism and surrealistic elements - influenced by Klee, Miro and the CoBrA movement - he gradually adopted a more austere and abstract style. Any "Moon-watcher' (his Dutch name 'Maan' means 'Moon') might very well recognize his attraction to the craquelure in early medieval art, to the savage Pollock eruptions and the obstinate colour abstractions by Eugéne Brands and Willem de Kooning.

While his works are abstract, we recognize In them very real imagery - sunlight dancing off water or bursting through mist, cloud formations and rich autumnal colours. His work represents the lyrical abstract art tradition but with its own merit and a mystical undertone. His oeuvre touches ineffably upon works by preceding masters, but always shows a compelling idiosyncratic character, recognisable for its authenticity.

His work has been displayed in galleries and Artfairs in The Netherlands, UK, France, Belgium and Japan since 1995, both as a solo exhibitor and in collaboration with other artists. His paintings are purchased by (private) collectors worldwide.

2018 I Galerie Drentsche Aa I Balloo I Netherlands