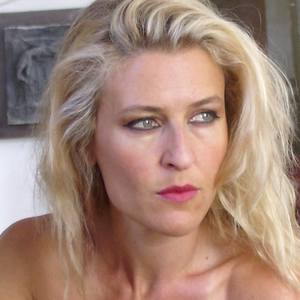 Elena Mutinelli, sculptress figurative, was born in Milan on 4th July 1967.
After achieving the degree in Sculpture at Accademia di Belle Arti in Brera (Brera School of Fine Arts), in 1989/1990 academic year with the teachers A. Cavaliere, Cascella, L. Silvestri, in 1990/91 she moved to Pietrasanta (Lucca - Tuscany), in order to learn marble working technique.
In the years 1992-1995, she worked between Milan and Pietrasanta and then, in 1995, she definitively settled in Milan, where she had the opportunity to weave together professional relationships with famous Art Galleries
From 1998 until 2004 she decided to open a new studio, where she could completely dedicate herself to sculpture and to the work of Milan Cathedral: in these years, in fact, she permanently set herself up as external partner of La Veneranda Fabbrica del Duomo di Milano (Time-honoured Factory of Milan Cathedral), for whom she had been working occasionally since 1992.
During the collaboration with La Veneranda Fabbrica del Duomo di Milano, she was involved in the reproduction of original marble works with the creation of marble work copies, she made in her studio.
Elena Mutinelli’s works are parts of many private and public collections, among which the most important.
Elena Mutinelli’s works are parts of many private and public collections, among which the most important are:
- 2000: Owens Corning, an international firm that produces thermo-acoustic insulating materials, bought Elena Mutinelli’s works, that were realized with its own production materials.
The same year, these sculptures were exhibited with the precious Antonio Guardi paintings and other important ancient works of art at Museo Lo Studiolo (Lo Studiolo Museum), in Milan.
- 2001: the Jolly Hotel Madison Tower in New York bought many Elena Mutinelli’s graphic works of art, that now are in all the rooms of the hotel.
- 2004: Siena Art History University acquired the work “Nell’arena” (“In the arena”), that has become a part of the University collection, whose director is Enrico Crispolti.
- 2005: the village of Reana del Royale unveiled the monument “Vuoto di mani congiunte” (“Emptiness of joined hands”), a monumental work of art made out of Fior di Roccia del Timao marble: this work of art was bought by AFDS and placed in Reana del Royale municipal square. (Udine - Northern Italy).
- 2008: Butan Gas, a sculptured work of art for a private collection.
- 2009 Tia Private collection, Denver.
- 2013/17Private collections in Europe

Giorgio Segato
Elena Mutinelli: The Michelangelo of the 2oth Century

We know that in the visual arts and in particular in sculpture, the female names of national and international importance, which live only of art, are very few in the world. Two names come in mind: the French Louise Bourgeois and the German Kiki Smith, both famous worldwide. In Italy no woman has ever arrived at the Olympus, earning a living with art. The exception (and a beautiful reality) is represented by a young artist (in her forties, therefore a little girl in the world of art) who for some time has been noted for her innate strength in her style, a primordial wisdom in the creation and execution of her sculptures of body parts, in a sensual and realistic atmosphere. The artist is Elena Mutinelli, blonde with piercing and investigating clear eyes, provided with striking physical strength, in a small body, full of nerves and ideas. Her themes are man, virility, the plasticity of the bodies, and the predatory character of human beings. She sculpts gnarled hands, with fingers ready to grab and hold you, as if they wanted to tear your clothes, your limbs and soul. Mutinelli attacks materials, marble, resin or other, with a know how that leads her to create her works from the initial sketch to the final work, thanks also to the training in Pietrasanta and at the Fabbrica of the Duomo, where she worked for some time. The artist can express herself, both on toned bodies, and on the faces of the old, where she follows all the wrinkles with gentleness and determination. Since birth, in Milan, where she attended the Academy of Brera, she has breathed freedom of action and thought, together with art, thanks to her maternal grandfather, Silvio Monfrini, remarkable sculptor, author of the monument to Francesco Baracca. A Milanese critic has defined her, the most significant Italian sculptor of the 20th Century and others have defined her, a Michelangelo of the Third Millennium, who through parts of the body, when she will realize a full figure she will arrive at challenging the Supreme artist.