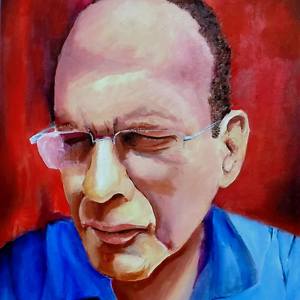 “Aspire to happiness, to calm a tempestuous soul, towards serenity “– that’s the way Eli Gross articulates the nature of his art. In his youth he was a student of the famous artists Jacob (Yoyo) El Hanani and Gabi Ben Zano. Recently after half a century of a demanding carrier, Eli has finally realized his age old dream. He studies art at Avni institute and is an active artist, painter and sculptor.
Eli’s longing for happiness is molded into the harmonious movement of his dancer characters. The same ideas are also conveyed in a silent embrace or pastoral landscape. The underpinning notion is one of harmonies stasis and nirvana.
A longing for absolute happiness and tranquility for a turbulent soul, for moments of serenity facilitated by silent embrace and harmonious movement of two unique souls and two intimate bodies in synchronized flow merging in body and soul.
An interesting path leads Eli’s work that starts as a drawing, then a burgeoning imagery, maturing into a painting and sometimes a multi-dimensional sculpture all born of a single idea.

The Habima Theatre the national theatre of Israel - August 2014

The Habima Theatre the national theatre of Israel - October 2014

The Gallery on Lake, Raanana - May 2015, Curator: Doron Polak