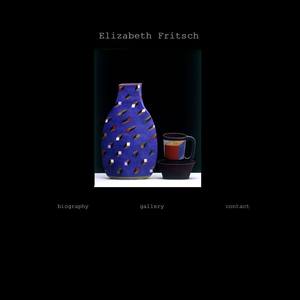 Elizabeth Fritsch Potter, born in Shropshire, England, UK. She studied at the Royal Academy of Music prior to attending the Royal College of Art, Ceramics (1968-71). She established a workshop in London in 1985.

Since the 1970s she has been one of the leading figures in British ceramics. She makes hand built vessel forms with strong architectonic qualities, which she prefers to show in subtly arranged groups designed to highlight the geometric shapes and decoration. She studied harp and piano at the Royal Academy of Music (1958-1964) but eventually took up ceramics working under Hans Coper at the Royal College of Art (1968-1971). She was one of a group of outstanding women ceramicists who emerged from the RCA in that period. Her ceramic vessels are carefully coil-built stoneware smoothed and refined into sharply profiled shapes. They are decorated with dry matt slips, in colours unusual for ceramics; the early work uses pale colours, then for a number of years she used stronger blues and green and more recently she has turned to monochrome forms. Although not a prolific artist she has had a number of significant one-person shows over the years and in 1996 was a finalist for the Jerwood Prize for Ceramics. Her work is represented in major collections in Britain and abroad and she is one of the most highly valued contemporary ceramic artists.