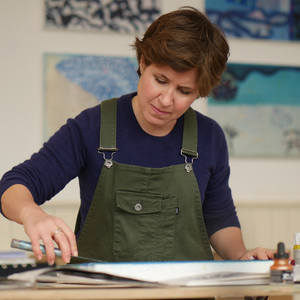 (B.1971 Nairobi, Kenya) I am a painter who investigates my own experiences of the world.
I am interested in describing a process of perception, discovery and regeneration: Spitting out paint and matter as I go along. A messy and rewarding process and something that keeps me endlessly satisfied.

I create layers of associations from scavenged sources: a slurry of art history, of physical landscape and emotional encounters and all the fictions I have constructed in between, especially the fictions I suppose.

I live in Penryn, near Falmouth in Cornwall and my studio is at Krowji in Redruth, U.K.

I am currently represented by Josie Eastwood Fine Art, U.K.

Currently based at Krowji, Cornwall, UK.

Pretty Like Pictures - Thame, Oxfordshire - A selection of Work - May 2015

Stevenage Arts Centre - 'Portraits and the Self' Solo Exhibition, Feb 2012