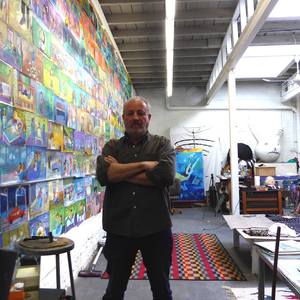 Born in Mexico City June 28, 1954 Lived in Mexico until 1982 when he came to New York to study. He's been an artist with shows in Mexico and New York, and has a variety of books and film animation projects. Santiago is a storyteller with a brush. He reflects a mixture of cultures, Sephardic/Mexican/ American. With his artwork he expresses nostalgia with a sense of humor.
He has been an artist in residence for the Jersey City Day of the dead parade puppet making. He has a mural in South Orange NJ. And shows regularly in New York, New Jersey and Mexico.

BA in Communication design in UAM Mexico, and MS in Pratt Institute in Brooklyn, NY.

Artist in residence for the Riverview Neighborhood Association in Jersey City for the Day of the Dead Parade.
Show at the Barret Art Center 2016
JCAST Flagship show Nov 2016
"Imaginary Places" from Studio Montclair at the Montclair Public Library, November 2016.