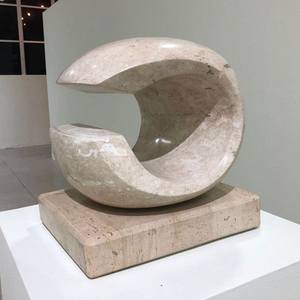 I am natural of a small city Urandi, Bahia,Brazil. where I lived the first years of life. To the six years, my mother takes the decision to come to So Paulo and, never more I came back toward my native city, today I am 73 years, living and working in So Paulo,Brazil.


The essence of life in the sculptures of Alvaro Franklin

In the Silence of his studio in So Paulo, the sculptur dedicates himself to his new phase: Germinetion.

To break with the established and secure and attempt something greater: such a transformation calls for strength, in addition to perseverance, a bit of restlessness and, above all, dedication. Alvaro Franklin da Silveira waited for right time before seeking new horizons in sculpture. He researched, reflected, got stronger. Now, with the confidence of an artist who has achieved his best, he shows the word his unique and moving work.
All of pieces transmit a feeling of life. The seed germinates under the earth becomes entwined in the roots, growing towards the surface in search of oxygen. At last it breaks through the soil and rises victoriously in the form of a bud. The designs and the possibilities of movement are endless. Germination has a magical way of materializing, starting from the union of two parts: the masculine and feminine. Says the artist, who had the idea of recording nature during the birth of his son, Saul.
And he chose to do in a stylized, but comprehensible, way. The balance and the enchanting lightness he succeeds in giving the se heavy blocks of white or rose-colored marble, blue granite and red quartzite also make one thing very clear: Franklin has tremendous experience and superior skill for working with stone. And, unlike many sculptors, he actually creates and executes his own pieces of work. His first contact with art took place very early in the sculptors life. Born in Bahia, in the town of Urandi, as a child he was dazzled by his grandfathers modeling and casting of tools. To me, it seemed that he was capable of giving form to everything he touched. That went straight into my blood, says the artist. At six years of age, living in the town of Araatuba, in So Paulo state, he was encouraged by his elementary school teacher to sign his first piece of work: Three pigeons (a white, a red, and black one) carved in bas-relief on a piece of wood.
By then l already sensed that sculpting would forever be a part of my life.
Between 1948 and 1956, Franklin took a General Arts course at the So Paulo School of Arts and Crafts. He took classes in drawing, modeling and sculpture. Later on he studied philosophy, a subject that developed his sensitivity to art even further. After improving his working with stone, a material that requires a demanding and lengthy process, he sculpted abstract figure: female nudes and stylized flowers. Today, 73 Years of age and with an enviable energy level, he is dedicating himself wholeheartedly to the Germination phase.
With an exhibit scheduled for march in So Paulo, he works up to 10 hours a day in his studio-workshop. And he never not even for a minute forgets what he considers to be the true meaning of art: to sensitize others .
And Franklin really does just that. Intensely!

News article of the magazine Oceanair

Sculptor, widely known in Brazil and abroad, started his career with his grandfather,
who taught him melt modeling, cast shaping and forge service.

During the period between 1948/1956, studied carving at SENAI, modeling and
sculpture at Liceu de Artes e Ofcios, in So Paulo. Also studied arts, as
a general rule, with masters in arts like Mr. Galilei Emendabili e
Mr. Vicente Larocca, besides others. He also made master courses in Plastic
Arts and History of Art.

In 1957, transferred to Rio Grande do Sul, where started his research about
Indian, African and Latin Art. During this period was also devoted to artistic
ceramics and painting. He started, also a Philosophy course at the Catholic
University, in Pelotas.

During the period between 1966/1974 took part in many exhibitions as invited
artist in the most important art galleries in Rio Grande do Sul and So Paulo.

He also made an individual exhibition named: Psique-Pintura, at Pancetti
Gallery of Art, in Porto Alegre/RS.

From 1975 he devoted his self to sculpture only, becoming one of the exclusive
artists of the Office of Art Renato Magalhes Gouva (Escritrio de Arte -
Renato Magalhes Gouva), taking part in a series of collective exhibitions
and different projects in So Paulo and other cities of Brazil. We can mention
as most important the listed below:

- Execution of different Art Projects to DURATEX Company, in So Paulo/SP;

- Collective Exhibition named: Um sculo no Brasil, at the Modern Art
Museum ( MAM ), in So Paulo/SP;

- Took part at the exhibition Alumnio na Arte, together with other 5 artists,
invited by ALCOA Aluminum S.A. Company, in So Paulo/SP;

- Took part at the book named: Bandeiras de Brecheret (History of a Monument),
by Marta Rossetti Batista, published in 1985;

From 1993 on, started a partnership with collector and merchant in the EUA, which supported him to include many sculptures in private collections in different countries, like: France, Spain, Italy, Holland, USA, Saudi Arabia, Porto Rico