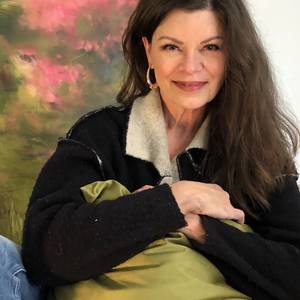 Faith Taylor - Bio
Faith is a full-time artist who paints in various styles including realism, abstract, cloud tossed landscapes and a collection of combinations that, despite their distinctiveness, share the commonality of depth. Her paintings compel viewers to reach out and touch them, as the viewer’s mind is curious at being unable to process, by sight alone, their intense depth and intimacy.

Faith was born in Houston, Texas and in her late teens became the first female disc jockey (Bunny Taylor) at the number one station in Houston, KRBE-FM. According to Faith, being on the air was an ‘outlet’ for her young creative spirit. It was several years later, shortly before her move to California in 1987, that Faith fell, head over heels, in love with painting.

Faith taught herself to paint by studying and copying the styles of the Old Masters, who she considers her “first loves”. Regardless of her choice of painting style, Faith’s artistic expression is a true representation of her experiences, inspirations, and her deep desire to capture a moment in time while remaining true to her intuition and sense of adventure.

Faiths works have been exhibited nationally and are in private and corporate collections. She resides and paints in Los Angeles, California.

With no warning whatsoever, life presented me with a "Detour". What originally appeared to be a major inconvenience has turned out to be an adventure of spirit and artistic growth.

I have almost always painted from memory, but now that I'm in unfamiliar territory I have no memories from which to tap into. So, with this new direction, I'm "off-roading" with new colors and new adventures in bold strokes. I am now creating without a preconceived notion of the finished product. Painting intuitively and spontaneously is giving me a sense of freedom and power like I’ve never known.
As an artist, it’s my job to tap into this new-found power of spontaneity and uncertainty and ask questions and ask again. I paint and paint again. It’s a time to trust the energy of my creativity now more than ever.

There is a sensation in my studio of feeling lost and found simultaneously. The harmony of that essence is where I learn to grow and learn to be fearless. The ‘reason’ for the detour is becoming more and more obvious and I’m learning to find comfort far, far from my originally well-defined comfort zone.

It may take hours, days, weeks or months to complete a painting, but the story that emerges from this new process is my story. I am transcribing a time and place or wordless thoughts. They are autobiographical and have a direct through-line to the essence of who I am. And, as in often the case with life’s events, they are unforeseen and created through a series of moments, with each moment adding up to now. My visual language is maturing and I am discovering an even deeper sense of who I am as an artist as I detour ahead.