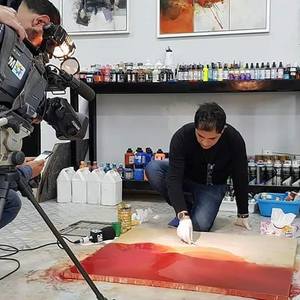 is now 20 years Abdel Aziz Lourhraz travels the art galleries. From Morocco to Argentina, passing through France, his works have traveled literally as figuratively. At 42, the artist has based much of his career on the study of the human body and especially the woman. Despite the taboo side that can come out, this theme is a way for the artist to question its existence and ephemeral but equally strong and rigid paradoxical physical states, sensitive artist. To find his style, Aziz Lourhraz began experimenting all forms of media and mediums, finally settling on the paint. Her art follows her intuition.
Me the growling shock of several worlds.

For Abdelaziz Lourhraz, the work has an allegorical and fantastic dimension. The painting becomes the pictorial transposition of a complex system of spiritual tensions which, for the artist, are at the base of the universe. A. Lourhraz is currently pursuing a process of purifying the impressions felt in nature: His love for the flowers inspires him an artistic and philosophical harmony, between consciousness and the body. The painter seeks to remove the exterior aesthetic element to retain only the moment of interiority. He is deeply in action by mixing psychically and aesthetically with the material he manipulates. He has to implement the secrets he carries in him.


The abstract painting express the inside motivation of an artist. Every painting work consists of real experiences. Visual artist always immerses deeper on his works so as to come up esthetical, physical and psychological feelings.
The artist mostly spends a long time in his painting works looking for the relationship between the plant element and corporal one, through meditating deeply in body and spirit by existential consciousness and the existence of the body. This mostly happens through an artistic and philosophical journey so as to dig in beauty, sophistication and wander, using material, beauty, harmony of colors, line as well as composition.